It Takes More Than One Book to Make a Writer

There’s a great line in the classic Hollywood movie Shanghai Express where a man says to Marlene Dietrich, who is playing the role of Shanghai Lily: “I see you’ve changed your name since we last met. Did you get married?” To which Dietrich replies in her breathy German accent, “It took more than one man to change my name to Shanghai Lily.” Well, it takes more than one book to make a writer.

The first time we write a book, we’re often just fumbling around, trying to find our unique calling as an artist. Everything is new to us: themes, characters, style, approach, diction. Often the first book, even if it takes years to write, is just practice, a dress rehearsal for another project. And, sorry to say, that can be true of the second or third or fourth book as well.

It may take the better part of a lifetime to really figure out what your project is, and how to realize that project.

Then how do you know if you really can be a writer, if you spend years on different books and none of them works out quite the way you had hoped? Well, even a book that you might consider to have fallen short of your expectations might have passages that show your true abilities as a writer. That page, that stanza, that paragraph, that chapter—if you can figure out what you did right there, and get yourself into the state of mind you were in when you wrote that, you can possibly sustain that higher level of work for a longer stretch, even an entire book.

In order to do that, though, you’ve got to be willing to listen to criticism, hear the truth about your work, and implement it in your writing. And not just the praise of your friends who love you and can't see your work objectively. You have to get that objective feedback because on your own, it’s extremely difficult to identify the strongest elements in your work. Often the difference between talent and a writer who consistently turns out quality work is the ability to take criticism seriously, and to learn from it. It’s OK to make mistakes, as long as you don’t keep repeating them.

I know that it’s tempting to give up after a book or two if the end product isn’t as good as what you’d imagined when you first got the inspiration. It’s so much easier to take up throwing pots, or hip-hop dancing, or playing the didgeridoo. When you first start a new art, you learn so much, so fast. It’s thrilling. You feel as if you’re making enormous progress. But then the hard work always sets in—learning from your mistakes, revising, polishing. No art is easy.


It may be that you are better suited to pottery or hip-hop dance. Didgeridoo, or didgeridon’t, either way it’s cool. If that is the art that energizes you, more power to you. But if your dream is really to be a writer, don’t give up after one book or two or three. You don’t get to be Shanghai Lily overnight.
Zack’s most recent book of poems, Irreverent Litanies
Zack’s most recent translation, Bérénice 1934–44: An Actress in Occupied Paris by Isabelle Stibbe

Other recent posts about writing topics: How to Get Published
Getting the Most from Your Writing Workshop
How Not to Become a Literary Dropout
Putting Together a Book Manuscript
Working with a Writing Mentor
How to Deliver Your Message
Does the Muse Have a Cell Phone?
Why Write Poetry?
Poetic Forms: Introduction; The Sonnet, The Sestina, The Ghazal, The Tanka, The Villanelle
Praise and Lament
How to Be an American Writer
Writers and Collaboration
Types of Closure in Poetry
Posted by Zack Rogow at 6:05 PM 1 comment:

In the last blog I talked about collaborations where the writer doesn’t have to change much in an existing work. The example I gave is when a poet has his or her work illustrated by a visual artist.

In this blog, I’m going to discuss collaborations where a writer repurposes existing text to create a new work with another artist. Here are some examples:

• Adapt a work of narrative prose into a play (for more, please see this blog)
• Turn one of your poems into a song lyric and collaborate with a composer who writes the music
• Edit a literary anthology that includes work by a visual artist or artists
• Work with an artist to create an artist’s book that includes text that you rewrite for the project

One example in my own work of text repurposed for a collaboration is an adult poem I wrote that became a children’s picture book. The book started as a two-page poem called “Oranges” that appeared in my collection A Preview of the Dream, published by Gull Books, a literary publishing house run by Carolyn Bennett. A Preview of the Dream sold all of 200 copies, which is not unusual for a small press book of poems.

My poem “Oranges” honors the diverse group of people whose labor goes into creating a single orange:

Somebody cleared the fields.
Somebody toppled the pines,
upturned the stumps.
Someone plowed the rows
straight as sunbeams in the heat
that made them swab their temples.
Probably they spoke Spanish.

The widely published and much lauded children’s writer Marilyn Sachs heard me read the poem and said, “With a little rewriting, that could be a picture book.” I’d never thought of writing a children’s book, so I asked her what she meant by rewriting the text. Marilyn pointed out that the ending was a little too adult for children:

A world of work
is in this ripe orange that I strip apart,
longitude by longitude.
I place a section
in my willing mouth
and its liquid fibers
dissolve on my tongue.

When I wrote that adult poem, I wanted to emphasize the sexiness of eating a section of orange. But in a children’s picture book?—not so much. I kept much of the poem as it was, but I rewrote the last lines:

A world of work
is in this ripe orange that I pry apart.
I place a section
in my mouth
and its liquid fibers
dissolve on my tongue.

Less sexy, but it still conveys some of the sensual experience of eating fruit, and in a way that children could appreciate.

A lesson I learned here: with collaboration, not every detail in a text has to be spelled out. The artwork ended up conveying much of the sensual experience of eating an orange.

Not only that, the illustrator communicated the entire concept of an orange containing a world of work  simply by drawing a frontispiece with an orange floating in space like a planet.

But I’m getting ahead of myself. The book was still only an idea. How to get it in print? Carolyn Bennett, the publisher of the small press book that included the poem, agreed to act as the agent for the text. Sometimes, in a collaboration, people take on unaccustomed roles.

Carolyn did great job in this new role. She sent the text to Richard Jackson, an editor at Orchard Books who had successfully steered the careers of many writers, including Judy Blume. It happened, by coincidence, that Dick Jackson was interested in a book that dealt with diversity—he immediately bought the manuscript. It was an incredible stroke of luck, but it would never have happened without rewriting the text. That repurposing made all the difference. 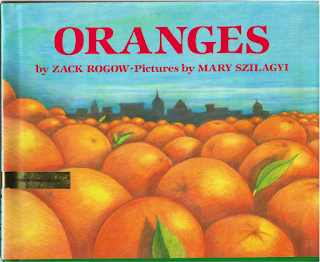 I originally had in mind for the drawings an artist I liked who had never done book illustration. Dick Jackson quickly let me know that he had his own ideas on this subject. Dick selected the experienced illustrator Mary Szilagyi, and Mary created gorgeous paintings to illustrate the book, working much harder on her artwork than I had on my short text. The hours spent on a collaboration don’t always even out, I’m afraid.

Large publishers do tend to like to pick the illustrator they want for a children’s book that comes to them as a text. They have a stable of artists whose work they admire and they know they can rely on. The publishers like to give those artists a steady diet of work, partly because they genuinely like their artwork, partly to keep the artists’ loyalty, and partly to support and promote their careers.

Dick Jackson made a truly excellent suggestion to improve the text, but I was such a young, hothead radical at the time, that I refused to listen, thinking that Big Business was trying to co-opt my political message. This was a side of collaboration I hadn’t learned yet—it also involves taking advice, even if it means changing your beloved text.

But in the end, Oranges turned out to be a successful children’s book. It was selected as a Junior Library Guild Book of the Month, and it sold about 10,000 copies. Much more than all of my poetry books put together. That’s another side of writers’ collaborations worth mentioning—the work of other artists can sometimes make literature way more accessible.
Writers and Collaboration, Part 1, Part 3, Part 4

Other recent posts about writing topics: How to Get Published
Getting the Most from Your Writing Workshop
How Not to Become a Literary Dropout
Putting Together a Book Manuscript
Working with a Writing Mentor
How to Deliver Your Message
Does the Muse Have a Cell Phone?
Why Write Poetry?
Poetic Forms: Introduction; The Sonnet, The Sestina, The Ghazal, The Tanka, The Villanelle
Praise and Lament
How to Be an American Writer
Writers and Collaboration
Types of Closure in Poetry