I first read Mark Twain’s The Adventures of Huckleberry Finn in secondary school. At the time, the book hadn’t yet generated the volume of controversy that it has provoked in recent decades. The Adventures of Huckleberry Finn is a regular on the American Library Association’s list of books most frequently banned in schools because of its attitudes on race. Ironically, the book was originally banned not long after it was published in 1884 by those who found its attitudes toward race and religion too radical and progressive. Still, I'm sympathetic to those parents who don’t think the novel is suitable as a textbook for their children. 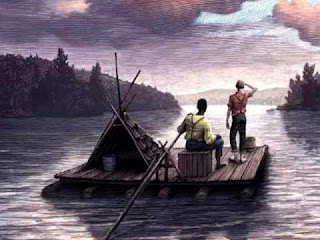 Listening to the audiobook recently, my reactions to Twain’s disputed classic were varied. I found myself laughing out loud at certain passages, but seriously troubled by some of his portrayals of black characters, especially Jim.

One of my favorite parts of the book was Twain’s portrayal of Tom Sawyer’s gullible Aunt Sally, and Sister Hotchkiss’s hilarious speech mannerisms:

Twain’s comical shortening of the phrases “says I” and “says he” does justice to the way that American slang can accordion long phrases into monosyllables. I was sitting on the 24 Divisadero bus in San Francisco not long ago, and one of the passengers was inadvertently delivering what amounted to a Mark Twain monologue to a friend sitting next to him. The passenger finished every sentence with, “Nohmsayn,” which I swear he pronounced as one syllable, even though the meaning was eight syllables long: “Do you know what I am saying?” His speech reminded me so much of Twain's Aunt Sally character.

In recording American idioms with loving authenticity, Twain was both poking fun of, and paying homage to, the speech of the common individual. He was honoring equality and democracy at a time when writers were generally expected to parrot the king’s English.

Twain’s vision of democracy versus royalty also emerges in the book’s characterizations. Two of the most unlikeable characters in the book are the shyster vagabonds who call themselves the King and the Duke and pretend to be descended from royalty. From the point of view of Jim and Huck, they are just like royalty in their lazy and parasitic way of life.

But not everything in Twain’s book is democratic. In The Adventures of Huckleberry Finn, Mark Twain mocks superstitious African Americans who are easily taken in, but the whites in the book don’t come across much better. Even so, there is an oddness to the gullibility of Jim and the other blacks Twain paints in the book. Huck seems to be able to fool black people at will into thinking that something they have just witnessed with their own eyes never happened. That willingness of the black characters to believe something contrary to their own senses doesn’t feel either funny or realistic to me.

So I would hesitate to give The Adventures of Huckleberry Finn either a simple thumbs up or a thumbs down. I don’t know that I personally would teach it to young people because of the stereotypes and the incessant use of the “n” word. I can understand parents being upset by those features of the book and not wanting their children to read it at a young age. But other aspects of the book are terrific. And it is laugh-out-loud funny in a great many places. The Adventures of Huckleberry Finn is not a book that I would be quick to judge in either a positive or a negative way. It’s a much more nuanced case, in my opinion.

So, what is the takeaway for writers, here? Even though Twain's book was farsighted for its time, it feels antiquated in many ways now. It's not enough for writers to be just a few years ahead of public opinion. Writers need to have the vision to imagine their work being read a hundred years or more in the future, and to conceive their own mission as an artist with the enlightened eyes (one can only hope!) of the next century.

Other recent posts about writing topics: How to Get Published
Getting the Most from Your Writing Workshop
How Not to Become a Literary Dropout
Putting Together a Book Manuscript
Working with a Writing Mentor
How to Deliver Your Message
Does the Muse Have a Cell Phone?
Why Write Poetry?
Poetic Forms: Introduction; The Sonnet, The Sestina, The Ghazal, The Tanka, The Villanelle
Praise and Lament
How to Be an American Writer
Writers and Collaboration
Types of Closure in Poetry
Posted by Zack Rogow at 5:52 PM No comments: