My Love-Hate Relationship with German Language and Culture

“Never turn your back on a German,” my Jewish mother used to tell me growing up. She had lived through the time of the Holocaust, though she’d been lucky enough to be in North America then, with the Atlantic Ocean a moat between her and the Nazis. But her generation of Jews knew what it meant to fear Germany, to know that if Germany won World War II, she would probably be murdered.

My mother also swore that, “I’ll never set foot on German soil.” In 1968, that vow was tested when she and I drove with French friends across Germany to get from Paris to Romania. My mom declared she would never leave the car. When we stopped for dinner in Baden-Baden, she stayed behind, ironically in our friends’ Volkswagen. 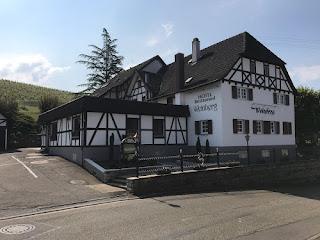 The rest of us were in the dining room, enjoying our dinner, when my mother joined us, reluctantly. “If I wasn’t so hungry, I’d have stayed in the car,” she grumbled. My mom ordered Kartoffelpuffer, potato pancakes, which she gulped down, enjoying every bite. “It’s just like latkes,” she joked, the food that Jews eat to celebrate the festival of Chanukah.

Many of the well-dressed Germans in the restaurant where we were dining were my mother’s age, old enough to have lived through World War II, or to have fought for the Nazis. She looked at them and said, “What were they doing during the war?” Good question. The horrors of World War II and the Holocaust provoke many questions about how a country like Germany that has given the world so much beauty and culture could commit atrocities that cost millions of lives.

Is it surprising that my mother’s demonizing of Germany made me want to learn more about that country, its language, and its culture? My mother turned Deutschland into a kind of forbidden fruit. She was so intent on teaching me to hate Germany, that I felt I had to make up my own mind about that country.

Some of my first positive experiences with Germany happened when I was in college, studying literature and philosophy. I continually came across references to German culture. I’m a leftist, and so much of the story and of the ideas of the Left come from Germany and Austria. starting with Hegel’s dialectic.

Then there was the German philosopher Martin Heidegger’s tantalizing use of the word Dasein, which literally means “existence,” but is made up of the words da, there, and sein, being. In other words, existence is about being there or being present in a certain place and time. How could I understand that elaborate wordplay and its deep resonances without knowing German?

So I began studying German in college. To my surprise, I already knew quite of a few of the words. I had to laugh one day in class when we learned the verb “to drag” in German, which is schleppen. Every Ashkenazi Jew knows what it means to schlep in Yiddish, to drag yourself from one place to another, as in, “I had to schlep all the way to Brighton Beach to get a decent knish.”

Likewise, the German word Kinder, children, already meant a great deal to me, because my very Jewish mother would call me and my sister to dinner with the Yiddish word Kinder. It dawned on me that there was a deeper connection between Jews and Germans than my mother had let on. As a friend of mine once put it, “German is a dialect of Yiddish.”

The abrasive tones of the German language still reminded me, though, of those World War II movies where the prisoner of war camp Commandant barked orders in the harshest tones: “Mach schnell!”

One year of college German did not get me to a point where I could really read and speak the language. I had to go to the belly of the beast to develop any fluency. The year my mother died, when I was 20 years old, I traveled to Germany to study in a Goethe-Institut with its intensive German language program where students stay with German families.

I was assigned to a school in a little town in Bavaria called Grafing, almost at the end of a Munich subway line that was newly finished just in time for the Olympics that were to take place that summer of 1972. Grafing turned out to be a strange bubble in time, a village out of a Richard Wagner opera.

The town had its own brewery that supplied great beer to the locals. Grafing also boasted an amazing bakery strategically located right across the street from the Goethe-Institut. During breaks we ate freshly baked warm Brezeln (pretzels), or Prinzregententorte with its endless layers of chocolate buttercream and sponge cake. 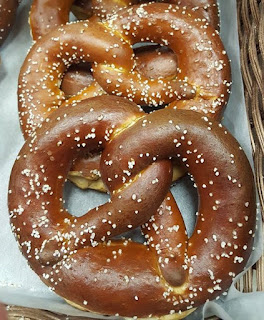 All the students in our program were housed in German homes. Many of the young people from the U.S. reported that they had practically been adopted by their host families. I hardly ever saw mine. The couple I was living with had a newborn who took up all their free time. The American students I spoke to also reported that the families they were staying with made nostalgic comments about how much better things were under Hitler—rural Bavaria was a Nazi stronghold. It didn’t help that, to promote tourism, the Munich city government was encouraging Frauen to wear Dirndls and Männer to wear Lederhosen one day a week, turning the whole city into something out of a third-rate Third Reich propaganda film. 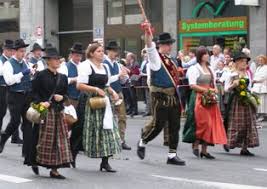 One night a friend from the program and I escaped to the outskirts of our little village and smoked a pipe of hashish that he had scored in the Englischer Garten (the English Garden), headquarters for German hippies in Munich. We were stoned out of our minds when we remembered that one of our teachers at the Goethe-Institut was giving a recital that evening at the school of fairy-tales from the Brothers Grimm. We went back to the school and walked in when the teacher had just begun a story.

Once we settled into our seats, we realized that the instructor was reciting from memory the story of Cinderella—Aschenputtel in German. Don’t judge the German language until you’ve heard one of Grimm’s fairy-tales in German. It’s so much more magical than the Disney version. The language is as musical as Beethoven’s Pastoral Symphony—it sweeps you along. In the original version, when the Fairy Godmother creates a dress for Cinderella, Cinderella has to recite a magic spell to a tree, a detail that Disney sadly deleted. Cinderella says,

The sounds of that fairytale are so soft, the consonants pillowed by the sibilant “ch” and “s” sounds. The rhymes clink so clearly. And the story is familiar. Not foreign in the least.

Those same qualities that I heard that night in the basement assembly room of a little school in Bavaria I found again when I read in German the gorgeous poetry of Rainer Maria Rilke:

If only once it would be completely still.

next door—if my whirring senses didn’t keep after

me, hobbling me from watching as I ought—

I realized the German I had been fed as a child was only a caricature of that country’s culture, a caricature that admittedly the Germans themselves contributed to making.