Dealing with Rejection as a Writer

One thing you don’t always hear when you’re starting out as a writer is that your work is going to get rejected most of the time you send it out. I’ve seen a variety of statistics, but it seems that in general, literary journals accept between 1% and 2% of their submissions. A magazine such as The New Yorker accepts an even lower percentage: .14%. That means they reject 99.86% of the work sent to them.

In fact, if the work I submit to literary magazines, publishers, and theaters is accepted even one tenth of the time, I feel as if I’m doing terrific. The reality is, there are many, many talented writers, and a much smaller number of outlets to publish in.

On top of all that, rejection is never easy to take. We work hard on our literary creations, and we pour our hearts into them. For that reason, rejection often feels as if our very souls are being turned back from the gates of Heaven and banished to literary hell.

So, how to deal with rejection? Well, one lesson I try to take away from a negative response is that my work can always improve. After a rejection, I imagine I’m the editor who reviewed my work, and then…poof, I accept it!

No, actually, I imagine I’m the editor, and I attempt to see my writing more objectively. I think how I can make that submission better before I send it out again. I try to consider each rejection as an opportunity to rethink and to polish my writing. That doesn’t mean ripping up what I sent and throwing it out. It means I strive to raise my work closer to my aspirations for my highest potential as a writer.

Another takeaway from getting your work turned down is that not all rejections are completely negative. In some cases, an editor takes the time to say that they liked your work and they hope you’ll submit your writing to them again. Do not take that as a polite version of a flat “No.” That means an editor really did appreciate your work. Make sure your submissions spreadsheet has a place to note rejections of that sort, and periodically go back to those notes and send more work, maybe six months or a year later. In your new cover letter, thank the editor for encouraging you to resubmit, as a way to remind them that they liked your earlier submission. Do not resubmit the same work, however—that would be ignoring what the editor told you in the first place.

One of the reasons you send out your work is that you’re hoping to reach out beyond your solitary labors as a writer. As the poet André Breton once said, “Writing is the loneliest road that leads everywhere.”

While rejection may not be the kind of connection you were hoping for when you submitted your work, it still means you were brave enough to risk sending your work out into the world. That’s a victory. Someone also saw your writing, and weighed it in their mind and heart. That’s also a connection. Concider viewing your attempt as an achievement, rather than as a negative.

If a particular work of yours keeps getting rejected, try sending it to a different kind of magazine. Over a two year period, I sent out a poem I thought was very publishable to 50 magazines in the United States. It got rejected at all of them. You read that right: 50 rejections! The 51st journal I sent that poem to, with an editor based outside North America, emailed me to say, “Congratulations! We loved your poem and would like to publish it in our next issue.” Sometimes it makes sense to mix it up a little.

But given that rejection is the most likely outcome of a submission, make sure you really celebrate when your work is accepted. Savor that moment. Don’t boast, but don’t be too modest, either. When the publication is posted online or arrives in the mail, share that with your friends and on social media.

It’s rarely easy to get your work printed online or on paper. But publication is, after all, one of the great thrills of being a writer. Yes, rejection is not the fun part of a writer’s life, but it helps us to improve our work, and it reminds us to keep faith with our literary calling, even when that is painful.

Posted by Zack Rogow at 4:00 PM No comments:

Haiku in Africa: An Interview with Adjei Agyei-Baah

This blog features an interview with Ghanaian poet Adjei Agyei-Baah, one of the leading writers of “Afriku,” the school of haiku poetry flourishing in Africa. Agyei-Baah is the author of three volumes of haiku: his latest, Scaring Crow (Buttonhook Press); Afriku (Red Moon Press); and Ghana 21 Haiku (Mamba Africa Press). He is the cofounder of the Africa Haiku Network (AHN) and coedits Mamba Journal, Africa’s first haiku magazine.

Could you talk a little bit about the history of haiku writing in Africa?

Haiku writing in Africa owes a lot to Sono Uchida, the prominent Japanese haiku poet and diplomat, who thirty years ago in Senegal initiated a haiku contest in the French language. That was the first international haiku competition in Africa.

During his mission as a Japanese ambassador in Africa, Uchida always felt that Senegal would be a fertile ground for the growth of haiku. The way the Senegalese people adapted to nature reminded him of the traditional world of the Japanese people, a way of life that was rapidly disappearing. According to Sono Uchida, it was the belief of haiku poets in Japan that nature does not belong to humanity, but rather it is humans who belong to nature.

Uchida’s promotion of haiku in Senegal was supported by the first President of Senegal, His Excellency Léopold Sédar Senghor, who was also a great friend of haiku.

In more recent years, haiku has spread particularly in West Africa, especially in Ghana and Nigeria. Some African haiku writers have pushed the genre in new directions. Emmanuel-Abdalmasih Samson of Nigeria, for example, invented what he termed “mirror haiku,” a technique now used by many other haiku writers around the world. Here’s an example from Samson’s poetry:

How did you personally come to haiku as a form for your poetry? Why does haiku particularly appeal to you as a writer?

I got to know haiku through my fellow Ghanaian countryman, Nana Fredua-Agyeman, a very strong haiku contender. He used to share haiku on his blog. I followed his adventures and became addicted to the genre. I was captivated by its feature of brevity and the way a short haiku also says much more. It seemed a good way to tell African stories.

Your new chapbook, Scaring Crow, has a remarkable form—every haiku mentions a scarecrow. What drew you to that image, and what associations does it have for you personally and as an artist?

It's a book I wrote purposely to try to push the frontiers of haiku. Arguably, it's the first haiku collection ever to explore a single theme in more than 100 ways. It was an honour and privilege to have great haiku scholars and doyens like Hiraoko Sato, Professor John Zheng, and Scott Mason contributing the foreword and blurbs. 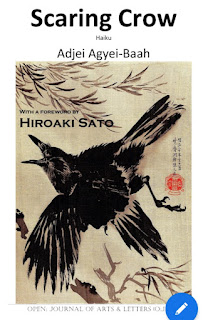 Do you write in other forms besides haiku, or in free verse? If so, how do you know when a poem wants to be a haiku, and when it needs a different shape?

Yes, I began with longer poems before discovering haiku, and I’ve had several long poems published in international journals and anthologies. As part of my practice, I create a haiku when nature presents a moment in a flash of lightning, that delivers a lasting after-image. But when I want to address humanity, or talk about more scholarly topics, I usually write longer poems.

Any advice for writers who would like to write haiku?

Deep observation yields haiku! To communicate an aha! moment from nature, a novice writer must constantly observe. Read good haiku journals and publications to improve your craft. I hope to see more African poets, both young and experienced, come to the practice of haiku to tell African stories, as few are doing at the moment.

Here are some favorites of mine from Adjei Agyei-Baah’s new chapbook, Scaring Crow:

passing on an old hat

Posted by Zack Rogow at 4:06 PM No comments: