Hubs of Creativity: Why Do Certain Places at Certain Times Become Artistic Centers?

In the history of literature, visual art, and music, there are times when an extraordinary group of artists gathers in one specific place and time, seemingly defying the odds. I’m thinking of two examples: Florence, Italy, in the Renaissance; and Detroit USA during the heyday of Motown Records in the 1960s.

Given that “talent is widespread,” as the writer Ishmael Reed once said, it’s surprising that large circles of great artists seem to spring up in particular places and times but not in others. Florence, Italy, during the Renaissance, had a population of roughly 60,000, about the same as the current census in Bismarck, North Dakota, or Terre Haute, Indiana—not exactly known as artistic hotspots.  How is it possible that a city of that size could produce a roster of great artists too lengthy to even list here, including Michelangelo, da Vinci, Benvenuto Cellini, Donatello, Fra Filippo Lippi, etc., etc.?

Similarly, Detroit in the 1960s gave rise to so many of the greatest artists in the history of rhythm and blues, including all of The Four Tops, The Temptations, the Supremes, Aretha Franklin, Stevie Wonder, Martha and the Vandellas, Smokey Robinson and all the Miracles, etc., etc.

In literature, these hubs have also occurred at various times and places, including the Romantic poets in England in the early 1800s, the Harlem Renaissance in the 1930s, the Beat Generation in New York and San Francisco in the 1950s. Why does a particular place and time spawn so many major artists, and other times not, even in the same location?

I think part of the magic formula is that a community of artists is willing to shape work to make it accessible to a large audience, and that their work meets a particular need at a particular time. At the other end of the equation, there have to be people who appreciate and support a specific art at a given time.

Florence during the Renaissance was a global center of finance and trade. Families such as the Medici built powerful banking empires. But not every banking empire has spawned painting, sculpture, and architecture like the Medici did in the Renaissance. After the otherworldly focus of much medieval visual art, there was also a collective need in the late 1400s for a culture that celebrated worldly beauty. To quote a renowned poem by Lorenzo de’ Medici himself:

He who would be happy, let him be,
Of tomorrow there’s no certainty.

The artists of the Italian Renaissance were incredibly good at creating beauty that built upon the Catholic tradition but also championed the sensual in everyday life. Think of Botticelli’s Primavera or The Birth of Venus, or Michelangelo’s nudes.


Artists of the Italian Renaissance also worked to make their art accessible to the public, creating sculptures for urban piazzas, and painting frescoes in churches. Art became part of the public identity of the Florentine people. I remember visiting Florence when I was in a pre-teen in the 1960s and learning about a nursery rhyme that children recited in the city, attributed to Michelangelo. The rhyme makes fun of the sculptor Bartolomeo Ammannati because his Fountain of Neptune in the Piazza della Signoria was not as well carved as the adjacent David.

Similarly in Detroit in the Motown era, there was both a willingness on the part of artists to address a public hunger, and a supportive audience. The rhythm ‘n’ blues of the 1960s followed the period of the 1950s when convention and traditional values tried to suppress the pleasures of sensuality and passion. It was a time when couples were almost never portrayed as even sharing the same bed in movies and television. The audience for popular music was eager for an affirmation of love, energy, and passion, and the artists of Motown were ready to provide “Dancin’ in the Streets,” a hit song by Martha and the Vandellas. 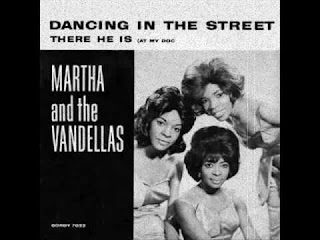 Barry Gordy Jr., the entrepreneur behind Motown Records, was also a genius at recognizing and promoting talent. He was particularly savvy about what it would take to get people outside African American communities to accept the energy and sensuality of that music. Gordy hired Maxine Powell, who had a finishing school for fashion models in Detroit, to guide Motown performers on how to walk, talk, and dress so that they would make a winning impression when performing or giving interviews.

So, in both Renaissance Florence and Detroit in the 1960s, there was a marriage of artists willing to make their work accessible to a wide audience, and an audience that was thirsting for culture to give them permission to enjoy facets of experience that had been repressed.

I realize I’m leaving out something extremely important. Florence in the late 1400s and early 1500s was heir to an artistic tradition stretching back hundreds of years. The city had been a center for art dating back to the great Byzantine paintings of Cimabue in the duocento (1200s of the Common Era). Detroit music of the 1960s also drew heavily on centuries of civilization, building on the legacy of African and African American culture that can be traced back to the sacred rituals of Yoruba and Ibo religion of West Africa. Hubs of culture don’t appear in a vacuum.

But for many great artists to flourish in a particular place and time, there does have to be that particular match and tinder of the artists’ willingness to bring their work to a wide audience, and a moment in history when the audience thirsts for art to meet a fundamental human need.
Zack’s most recent book of poems, Irreverent LitaniesZack’s most recent translation, Bérénice 1934–44: An Actress in Occupied Paris by Isabelle Stibbe

Other posts on writing topics:

The Motown Last Dollar Choice and What It Means for WritersHow to Get Published
Getting the Most from Your Writing Workshop
How Not to Become a Literary Dropout
Putting Together a Book Manuscript
Working with a Writing Mentor
How to Deliver Your Message
Does the Muse Have a Cell Phone?
Why Write Poetry?
Poetic Forms: Introduction; The Sonnet, The Sestina, The Ghazal, The Tanka, The Villanelle
Praise and Lament
How to Be an American Writer
Writers and Collaboration
Types of Closure in Poetry
Posted by Zack Rogow at 12:23 PM No comments: