Frank Paino’s first two volumes of poetry, The Rapture of Matter and Out of Eden, both from Cleveland State University Press, astonished readers with their exquisite insights into the human condition. His literary mentors include the poets he studied with in the Vermont College MFA program, Mark Doty, Lynda Hull, Richard Jackson, and David Wojahn.

Zack Rogow: Should a book of poems have a common subject, theme, or thread? If so, why? And does Obscura have that? If it does, what is the common thread?

Frank Paino: I’m not sure I really buy into the idea of “should” and “should not” when it comes to poetry books. Each is as individual as the poet. That being said, it’s certainly true that most contemporary volumes tend be thematically-oriented. Some readers will find that approach helpful. Others may not.

Personally, I have never set out to deliberately create a manuscript organized around a specific theme; despite that, I really only write about the things I am wildly passionate about, so that narrows the field to such a degree that I think my same little cosmos of themes will always be there for me from book to book. 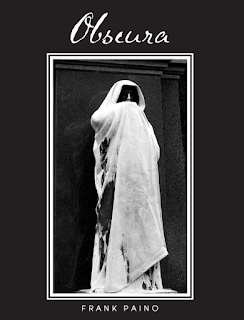 FP: The common threads in Obscura are what I mentioned a few moments ago. Yet, despite these connections, I had a difficult time putting the manuscript together because I was (and am) somewhat resistant to the idea of books being divided into sections. Instead of making those separations (which may have been problematic in any case), I just laid all the pieces on the floor and tried to determine how one might speak to another in ways beyond what might seem to be the most obvious. It was a process I both loved and abhorred.

I’ll add here that, as a reader of poetry, I almost never pick up a book and move from cover to cover. Instead, I choose by titles that intrigue me, or, sometimes, I just pick a page number and open to whatever poem happens to be there. I’m not sure if other people read poetry in this manner, but I prefer it that way. I look at each poem as its own world and I’m more than happy to switch things up between pieces. I don’t necessarily want a guide.

As for ideas and/or finished poems that weren’t included in Obscura, I’ve got enough other material for an entire manuscript, mostly older work that didn’t make it into the book for any number of reasons. It’s been over 20 years since I published a volume of poetry. During much of that time, I wrote on and off, but I really didn’t submit to many journals, and I certainly didn’t send manuscripts out until the last few years, so, in addition to a lot of newer work, I have a backlog of older poems.

Perhaps more to your point, though, while there’s nothing wrong with such topics, I don’t have a cache of nature poems, or love poems, or humorous poems, or political poems (you get the picture!) waiting for a new manuscript to fit into. I might experiment with different forms or styles, but my obsessions and passions, my themes, are pretty consistent. The one exception would be personal narratives…something I used to write a lot more of, but, honestly I find myself increasingly disinterested in creating that sort of work. There are exceptions, even in Obscura, but, for now at least, I’m far more interested in looking out at the world.

FP: I’m not sure I pick an event or person so much as they pick me. If I read about something/someone, or see a show on a rather obscure, strange, dark, or off-the-wall topic, I’ll immediately know if it wants or needs to be a poem I want to take on. Additionally, I have a number of people who know me well enough that when they come across something they consider to be a “Frank topic,” they’ll pass the info on to me. It might be months or years, but a lot of those “tips” have become poems. My sister, Gerrie, is a good one for this sort of thing, but I’m often surprised and delighted by people who think of me when encountering the aforementioned sorts of information. It’s weirdly flattering!

The amount of research varies with my prior familiarity, or lack thereof. In the case of saints, for instance, I have a vast store of that information in my head. But something like William Forsyth’s “reverse Noah’s ark,” which I wrote about in the poem “Falling,” took quite a bit of research.

That being said, I don’t feel an obligation to get all the facts into a poem. Indeed, my first priority is to language...to the craft. Being 100% accurate about every historical fact is secondary. My poem about the space dog Laika is a case in point. I know I don’t have every detail right, but the basics are all there and I think the point is made. Someone, I can’t recall who, once told me about an artist from Newfoundland, Christopher Pratt. As the story goes, Mr. Pratt had a friend who remarked that the artist’s rendering of a hay field was very inaccurate because farmers would never make the haystacks in the way Pratt depicted. To which Pratt replied, “Probably so. But this isn’t a hayfield, it’s a painting.” Well, I’m a poet, not an historian. I want to tell the story, but I don’t feel any obligation to get every detail correct.

Finally, I’m a frustrated visual artist. I think this drives my lyric impulse. As I have no ability to paint or sculpt, I use words as my palette or clay. So, when I approach an actual event, it is with my innate tendency to see things with an artist’s eye…it’s the only way I know to enter those moments, and I think it saves me from any risk of merely recounting “the facts.”

ZR: Many of the poems in Obscura are about ill-starred or doomed events or people—the fire that devastated a pleasure cruise in New York in 1904, the execution of the spy Mata Hari, the suicide of the pregnant Harriet Westbrook Shelley (first wife of the poet Percy Shelley). What is it about the tragedies in this book that tug at you as a writer and make you want to explore them deeply in poetry?

FP: I’ve got what I consider to be a healthy preoccupation with death. Our culture is such that many people want to ignore the fact of our mortality. But I think it’s critical to embrace that reality so that we are daily inspired to live as fully and as generously as we can. After all, this is the only life we can be certain of, so we should be mindful of making it the best it can be...for ourselves as well as others (including those who will come after us).

One natural avenue to take in this regard is pondering the ways others have faced tragedy and death. This can be quite instructive. It forces me, as a poet, to ask a lot of big questions, and, hopefully, share my perspectives in a way that’s both meaningful and aesthetically resonant with anyone kind enough to read my work.

Finally, I’ll say that while I believe it’s important to write about these topics, I also think there’s a fine line between a kind of redemptive exploration and simply being morbidly voyeuristic. I never want to write about something purely because it’s tragic. I’m interested in holding the darkness up to the light as a means of informing the way I live. My poetry refuses to turn away from disaster, evil, grief, oppression, etc., because it’s searching for a way through. If I’m lucky, whatever path I discover might be one at least a few of my readers will want to travel with me, too.

Other recent posts on writing topics:
How to Get Published
Getting the Most from Your Writing Workshop
How Not to Become a Literary Dropout
Putting Together a Book Manuscript
Working with a Writing Mentor
How to Deliver Your Message
Does the Muse Have a Cell Phone?
Why Write Poetry?
Poetic Forms: Introduction; The Sonnet, The Sestina, The Ghazal, The Tanka, The Villanelle
Praise and Lament
How to Be an American Writer
Writers and Collaboration
Types of Closure in Poetry
Posted by Zack Rogow at 11:21 AM No comments: