It turns out that T.S. Eliot never said the phrase often attributed to him, “Good poets borrow, great poets steal.” According to a blog I read recently, what Eliot actually said was, “mature poets steal; bad poets deface what they take, and good poets make it into something better, or at least something different.” Either way, the phrase sings the praises of literary theft, which on the surface is an incredibly odd statement, particularly in the realm of the arts, where originality counts for so much.

Eliot might have been thinking of works like his poem “The Waste Land.” That classic is, to a great extent, a collage of snippets “stolen” from a variety of sources, including Richard Wagner’s Tristan und Isolde, what U.K. bartenders say at closing (“HURRY UP PLEASE ITS TIME”), the Upanishads, and dozens of others. For Eliot and the poets who were close to him, like Ezra Pound, borrowing from the literary canon, as they read it, was a necessity, a way of showing that you knew your lineage. But to my mind, there is something terribly elitist about that way of looking at the poet’s calling, since the lineage that those poets acknowledged consisted only of certain types of writings by male poets in the Indo-European tradition, with a bit of Confucius thrown in for good measure.

What the phrase “mature poets steal” means to me is something different from what it meant to Eliot and Pound. At a certain point in my life as a writer, I developed a mania for originality. This was useful when I was attempting to free myself of all the influences that I’d cluttered my work with, when I first began writing. By prizing originality over anything else, I was challenging myself not to sound like T.S. Eliot or Ezra Pound or my favorite poet of the month, but to write from my own voice and experience. Easier said than done—finding that individual calling as a writer is a lifetime’s work.

What that fixation on originality left out was literary community. I eventually came to realize that I could take my work only so far on my own. I needed a community of writers to provide insight into my writing, and to sharpen my abilities as an editor of the work of other writers, and myself. The reality is that one pair of eyes can only see so much. Many pairs of eyes can see a much wider panorama.

I belong to a wonderful writers group that meets once a month for a potluck brunch and a round robin where we all read our latest poems. I hardly trust myself to finish a poem until I’ve run it past that group, called Thirteen Ways, because I highly respect their judgment. Even if I don’t take all their suggestions, I need to hear their reactions to my work to know if I’m headed in the right direction. I also show my work to other peers.

At first I was hesitant to take any specific suggestions that other writers gave me. I was still fixated on the need for originality. In time, I came to realize that finishing well the works I initiated was much more important than my personal claims as the author. If a member of my writing group read a line of mine that fell short in some way, s/he might suggest another wording. Originally I would note that down, but insist on altering the offered wording, to avoid stealing. Now, if I feel that the suggested wording is just what the poem needs and wants, I sometimes take the phrase word for word. It’s much more important for the poem to be as good as it can be, than for me to have written every single word in it. “Mature poets steal.”

Of course, if someone suggested completely rewriting my poem, and gave me all the specifics, I wouldn’t accept that. But one line, or a title?—I thank my lucky stars that I have such good literary friends, and I insert that gift into the poem. I know that I can’t always be the best editor of my own creations, and I am grateful that I have other writers I trust who can help me improve my work when I need it.

How to Get Published
Getting the Most from Your Writing Workshop
How Not to Become a Literary Dropout
Putting Together a Book Manuscript
Working with a Writing Mentor
How to Deliver Your Message
Does the Muse Have a Cell Phone?
Why Write Poetry?
Poetic Forms: Introduction; The Sonnet, The Sestina, The Ghazal, The Tanka, The Villanelle
Praise and Lament
How to Be an American Writer
Writers and Collaboration
Types of Closure in Poetry

I recently did a poetry reading at The Book Loft, a wonderful independent bookstore in Columbus, Ohio. The Book Loft is one of those safe harbors where you can browse to your heart’s content in a labyrinth of levels, leaf through books on benches in their garden, or hear authors reading their work.

The author I had the great pleasure of reading with was Marcus Jackson, poet and instructor in the MFA programs at The Ohio State University and Queens University of Charlotte.

Since the reading, I’ve been pouring over his book Pardon My Heart, published in 2018 by TriQuarterly Books. It’s an amazing collection of poems, utterly sophisticated and polished in the poet’s use of metaphor and the music of words, and deeply grounded in streetwise, North American urban life. 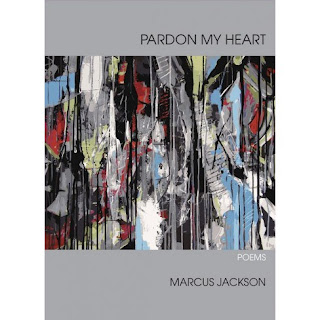 My daughter Miranda attended the reading that Marcus and I did in Columbus—she’s used to hearing her dad's poems about topics that relate to the angst of graying hippies.  She was surprised by how much she could relate to Marcus's writing. “I felt his writing resonated with the millennial esprit,” she enthused. What’s so terrific about Pardon My Heart is that the poet not only speaks of growing up in the late 20th and early 21st centuries, and the world of pickup lines in bars, new marriages, and babysitters, Marcus Jackson writes about those topics with all the polish and panache of an author who’s been doing this for decades.

Here’s a short poem from Pardon My Heart where Marcus Jackson reflects on his mother:

Filling with my mother’s smolderings,
this tawny, six-sided, three-pound glass dish
has sat forty years at the table’s center.
During lapses in labor or happiness,
Mother smoked Merit after Merit, her mind
a crowded parlor of plans, self-hate,
and urgent glimpses of encounters long past.
She split the skin atop my father’s skull
once with this ashtray as he grabbed her.
Weekly, after she emptied and washed it, Friday’s light
entered the drafty sash and upheld this ashtray
as the crown of one woman’s quiet country.

This moving portrait, a capsule history of a family in twelve lines, is studded with dazzling details. In line 1, the ashtray holds the mother’s “smolderings,” which tells us so much about her temperament and fate. The word “lapses” in line 4 gives us in one word the understanding that labor and happiness were major parts of her being in the world. The brand of her smokes, Merits, is a both a tribute to the mom and a word that adds to the alliteration in a line where that repetition suggests chain smoking. When violence explodes in line 8, the poet describes it in perfect iambic pentameter: “She split the skin atop my father’s skull,” with the rhythm reinforcing the hammer of the ashtray. By the end of the poem, the author has alchemized this commonplace ashtray into a crown, testimony to the mother’s creating tranquility for her child in a stormy world.

Marcus Jackson also describes African American life with insight, irony, and pathos. In the poem “Homage to My Wife’s Hips,” he writes

In the presence of her hips, thin
White women lower their heads
like children who’ve broken a dish.

Another amazing metaphor, from a poet who is so adept at them.

Marcus Jackson has the heart, the craft, and the intellect of an important poet. Enjoy his work!

How to Get Published
Getting the Most from Your Writing Workshop
How Not to Become a Literary Dropout
Putting Together a Book Manuscript
Working with a Writing Mentor
How to Deliver Your Message
Does the Muse Have a Cell Phone?
Why Write Poetry?
Poetic Forms: Introduction; The Sonnet, The Sestina, The Ghazal, The Tanka, The Villanelle
Praise and Lament
How to Be an American Writer
Writers and Collaboration
Types of Closure in Poetry
Posted by Zack Rogow at 1:31 PM No comments: