Choosing Poems for a Reading

The poems you choose for a reading can make an enormous difference in how an audience receives and appreciates your work. The order that you select for your poems can be equally important.

You may want to focus your choices on a recent book, in order to promote sales. If you include poems from too many different projects, the audience may not focus enough on any one series of poems to want to read more.

The poem you start a reading with should be one of your best, or at least one of the works you feel particularly excited about in the collection or group of poems you’re featuring.

The first poem sets the tone for your reading. It shows the audience that you’re going to deliver a satisfying experience, and that they should pay close attention. The first poem forms a bond between the poet and the audience—if it’s the right poem. The wrong poem can have the opposite effect—it can put the listeners on guard that this reading might demand things emotionally that they are not prepared to give. 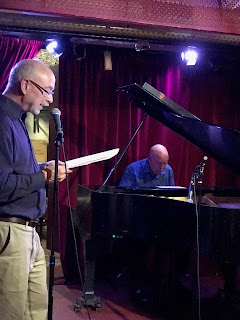 What do I mean by “the right poem” or “the wrong poem” to start a reading with? Well, a poem that puts the audience members on the defensive or that puts an idea in their mind that the poet is not psychologically stable is not a good choice. For instance, a first poem that relates an episode of kinky sex, or violence, or terrible tragedy, is a questionable way to start a reading.  I’m not suggesting that you take those poems off your list. Not at all. But the audience wants to know first of all that the poet is in control of his/her life and that the audience is not there to take care of the poet’s life traumas.

A poem that is dense and requires multiple readings to understand or appreciate is also not a great choice for the first poem of a reading. Long poems are also not the best.

On the other hand, the first poem, and all the poems in a reading, should challenge the audience. The people who have made the effort to come out and hear you want to be surprised, moved, and provoked to think and feel. That balance between tossing a thunderbolt at the audience, and making them feel comfortable, is not an easy one, but it’s critical to a good reading.

One way to set an audience at ease from the beginning of a reading is to use humor. Audiences love the release of laughter. It allows them to relax.

One of the most effective arcs for a poetry reading is to begin with humor, and to grow more serious as the reading progresses. This allows the audience to get comfortable with you and to trust you, and then to challenge them with more highly charged work as the reading goes deeper.

The transition from humor to seriousness is a delicate one. Sometimes humor can lighten up a serious mood that you create with a poem about a highly emotional topic. But reading too raucous a poem after one that deals with tragedy may trivialize and conflict with the mood you’ve created, and it can distance the audience. In my opinion, it’s better to start funny, and then move toward deeper topics, with a transitional poem to make the bridge.

Of course, some poets focus primarily on humor in their work, and some deal with such serious subjects that humor isn’t part of their repertoire. All that is fine. I’d only suggest starting and ending with two of the most impactful poems, to create a shape to the reading.

One final rule of thumb: don’t cry at your own reading. It’s good to read emotional poetry, and for the audience to see that you have a lot at stake emotionally in your own writing, through your voice and expression. But if you actually cry, you’re going to weaken the bond between you and your audience, because they’re going to start worrying if they have to take care of you, rather than appreciating your writing. In a sense, the poet is taking care of the audience’s edification and emotions for the duration of her/his reading, so it makes the audience uncomfortable when the shoe is forced onto the other foot.

Other recent posts on writing topics:
How to Get Published
Getting the Most from Your Writing Workshop
How Not to Become a Literary Dropout
Putting Together a Book Manuscript
Working with a Writing Mentor
How to Deliver Your Message
Does the Muse Have a Cell Phone?
Why Write Poetry?
Poetic Forms: Introduction; The Sonnet, The Sestina, The Ghazal, The Tanka, The Villanelle
Praise and Lament
How to Be an American Writer
Writers and Collaboration
Types of Closure in Poetry
Posted by Zack Rogow at 9:02 PM No comments: