We all hated our tenth grade English teacher, Mr. Glicksman. In the late 1960s, a time of rebellion and questioning authority, Mr. Glicksman was an old-school disciplinarian. He had taught high school English since shortly before the rocks were placed at Stonehenge. Any violation of his long list of rules incurred points off your grade or a visit to the dean of students.

Mr. Glicksman had turned the literary arts into a precise science. He gave quizzes on 3 X 5 cards, a piece of white, lined card stock about as wide as your hand and as tall as your thumb. All information was reduced to a series of ten multiple-choice questions that could be answered on one of these cards when it came time for a quiz.

When we studied Homer’s Odyssey, the test questions did not probe the thought-provoking issues raised by an ingenious traveler battling for decades against a hostile god, mythical creatures, and the elements, while yearning to get back to his wife, son, and homeland. Instead, Mr. Glicksman’s quizzes focused on cold facts. One typical question that sticks in my mind (possibly because I got it wrong!) was: “Did Odysseus bend the bow on the third, fourth, fifth, or sixth try?” The answer is the third try, in case you were dying to know.

And I would that my tongue could utter

The thoughts that arise in me.

O, well for the fisherman’s boy,

That he shouts with his sister at play!

O, well for the sailor lad,

That he sings in his boat on the bay!

And the stately ships go on

To their haven under the hill;

But O for the touch of a vanish’d hand,

And the sound of a voice that is still!

At the foot of thy crags, O Sea!

But the tender grace of a day that is dead

Will never come back to me.

When Mr. Glicksman read that poem aloud to our class, he revealed a rare personal emotion, telling us that those lines recalled for him the death of his own brother. He took off his glasses for a second and wiped away an uncharacteristic tear. We were shocked, but also, having suffered under Mr. Glicksman’s harsh penalties for any minor infraction, the students were ready for revenge. After class, the sophomores mocked him for his soft-hearted response: “Can you believe the way Glicksman almost cried at that corny old poem!”

Not long ago, I was walking by the Pacific Ocean at Sea Ranch in California.

The sky was spread with clouds; waves were fracturing against the rocky coastline. I couldn’t help thinking of the lines Mr. Glicksman had read us:

I soon reread Tennyson’s poem, and it moved me, for the first time. It was partly that deeply felt sense of loss that the tides of the ocean pulled out of me that day, and partly the sheer music of the poem’s words.

At first glance, Tennyson’s sixteen lines seem to have a somewhat mechanical plan, with predictable rhymes such as sea and me, and play and bay. But the closer I looked at the poem, the more unconventional it seemed. The first line in stanza 1 has only three syllables, and the same word appears three times in a row. That’s a sharp contrast to stanza 2, where the initial line has eight syllables and no word repeats. The powerful stresses in every line constantly shift the rhythm, from anapestic to iambic to spondaic, evoking the strong but unpredictable swirling of the sea. Tennyson uses mostly monosyllabic words to create pounding beats, and masterfully inserts polysyllabic touches to change up the cadences.

Maybe more surprising than the poem’s structure is the fact that the speaker is addressing not a lost loved one, but the sea. The poet says he is unable to “utter/The thoughts that arise in me.” His sense of loss is so jagged that he can barely express it. He can’t even name what or who he’s mourning for.

Nothing expressed for me so vividly the feelings the ocean evoked for me that day at Sea Ranch as the poem our teacher had recited to our class, a poem that had lodged in my synapses for 54 years. And I suddenly felt gratitude for that crotchety old Mr. Glicksman, and a sense of loss for “the sound of a voice that is still.”

John Steinbeck’s Epiphany in the Redwoods

Man against Nature—that was one of the great themes of literature that Ms. Weiss taught us to appreciate in eleventh grade English at the Bronx High School of Science. And that theme was certainly recognizable in many of the books we read that year, among them John Steinbeck’s The Grapes of Wrath, published in 1939 when the author was thirty-seven. 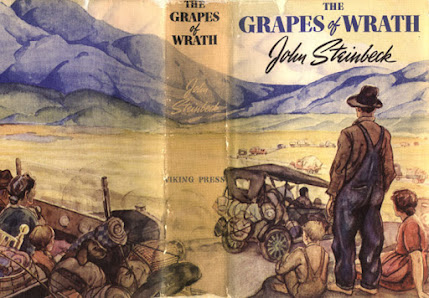 Steinbeck opens The Grapes of Wrath with an unforgettable chapter on the cataclysm that hit the Dust Bowl in the U.S. prairies in the 1930s:

The wind grew stronger, whisked under stones, carried up straws and old leaves and even little clods, marking its course as it sailed across the fields. The air and the sky darkened and through them the sun shone redly, and there was a raw sting in the air.…

In The Grapes of Wrath, nature feels like a force trying to thwart or obstruct human well-being. What Steinbeck doesn’t mention is that these dust storms were made worse by human factors. Before the region was developed for agriculture, it was filled with tall, deep-rooted prairie grasses. Unsustainable farming practices resulted in an ecosystem with little defense against drought and winds.
The Man against Nature paradigm that Steinbeck used in The Grapes of Wrath began to shift in the period after World War II, when the impact of the industrial economy on nature and on human life became more immediate and clear. It’s intriguing that Steinbeck lived long enough to experience and actually influence this shift himself.

At the start of the 1960s, not long before his death at age 66, Steinbeck set off on a quest. “I discovered that I did not know my own country,” he wrote in Travels with Charley, the book where he recounted his trip in an RV with his dog, across the United States.
At the start of his journey, Steinbeck still looked on America as something of an obstacle: “I was determined to look again, to try to rediscover this monster land.”
Steinbeck did look again, particularly when he revisited the redwoods of his native California.
This time he saw with new eyes: “The redwoods, once seen, leave a mark or create a vision that stays with you always,” he wrote. “From them comes silence and awe. It’s not only their unbelievable stature, nor the color which seems to shift and vary under your eyes, no, they are not like any trees we know, they are ambassadors from another time.… The vainest, most slap-happy and irreverent of men, in the presence of redwoods, goes under a spell of wonder and respect.”

Steinbeck’s new encounter with the redwoods towards the end of his life was part of a major shift taking place at this time. In 1962, the same year that Travels with Charley appeared, biologist Rachel Carson published Silent Spring, causing a storm of controversy about the impact of pesticides on the environment and human health, and helping to launch the environmental movement. At the same time, John Steinbeck, in his final years, experienced among the redwoods an epiphany that shifted his way of looking at nature—not as humankind’s opponent, but as the domain of revered elders in the family of living things.

Other posts on writing topics:How to Get PublishedGetting the Most from Your Writing WorkshopHow Not to Become a Literary DropoutPutting Together a Book ManuscriptWorking with a Writing MentorHow to Deliver Your MessageDoes the Muse Have a Cell Phone?Why Write Poetry? Poetic Forms: Introduction; The Sonnet, The Sestina, The Ghazal, The Tanka, The VillanellePraise and LamentHow to Be an American WriterWriters and CollaborationTypes of Closure in Poetry

Posted by Zack Rogow at 7:12 PM No comments: