Nicholas Nickleby: or, There’s More to a Story Than the Plot

Nicholas Nickleby is a relatively early novel by Charles Dickens. The book doesn’t have a well-oiled plot, unlike many of the author’s creations. In a work such as Great Expectations, published twenty-two years later, Dickens creates suspense right from the very first chapter, and then the reader is swept along in the fast-flowing river of the story all the way to the end. Nicholas Nickleby lacks that current of suspense. I think it’s fair to say that the reader’s emotional investment in the outcome of the plot doesn’t become much of a factor until a couple of hundred pages into the book.

Most of the numerous characters in Nicholas Nickleby also lack the complexity of Abel Magwitch in Great Expectations, for example, who starts out as the scariest and creepiest figure in the book, and evolves into perhaps the most sympathetic. The characters in Nicholas Nickleby are relatively flat, either all good or all bad, and they change little over time. The handsome and beautiful characters are universally good, and the ugly ones are all bad—very predictable

And yet…the book held my interest throughout. When I ask myself why, I think it’s partly because Nicholas Nickleby is Dickens’s funniest novel. The satire is so daggered, the narrator always means the exact opposite of what he says, using comically grandiose diction. It is laugh-out-loud funny in so many places, and there are chuckles throughout. Here is Dickens’s initial description of the evil miser, Ralph Nickleby, older brother of the protagonist’s father:

Ralph, the elder, deduced from the often-repeated tale the two great morals that riches are the only true source of happiness and power, and that it is lawful and just to compass their acquisition by all means short of felony.

Even the names of the characters are sometimes hilarious, including the self-important actress Miss Snevellicci. Every time Nicholas Nickleby’s mother opens her mouth, the reader has to laugh at the strange meanderings of her mind (apparently based on Dickens’s own mater familias). Mrs. Nickleby always seems to get distracted by irrelevant details and to miss the main point of her own remarks. Here is Mrs. Nickleby’s attempt to explain why she believes her daughter, Kate, is very intelligent:

I recollect when she was only two years and a half old, that a gentleman who used to visit very much at our house—Mr. Watkins, you know, Kate, my dear, that your poor papa went bail for, who afterwards ran away to the United States, and sent us a pair of snow shoes, with such an affectionate letter that it made your poor dear father cry for a week. You remember the letter? In which he said that he was very sorry he couldn’t repay the fifty pounds just then, because his capital was all out at interest, and he was very busy making his fortune, but that he didn’t forget you were his god-daughter, and he should take it very unkind if we didn’t buy you a silver coral and put it down to his old account?

None of this has anything to do with whether her daughter Kate is intelligent, and not only that, Mrs. Nickleby seems completely unaware that Kate’s so-called godfather is a con man. The book is peppered with wonderful comic bits like this, and those moments are part of what sustains the reader until the plot finally kicks in.

The other affecting part of Nicholas Nickleby is Dickens’s exposé of corrupt Yorkshire boarding schools where unwanted boys were dumped, forgotten, and abused. 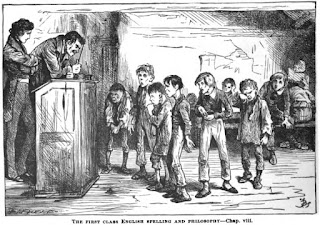 This part of the novel is linked to the most interesting character, Smike. The young man Smike has been so brutally treated in the boarding school where he works almost as a slave that he has lost much of his ability to think and feel for himself. And yet he is doggedly loyal to Nicholas and his sister, and has an instinct for the good despite his lack of mental acuity. The cleverest part of Dickens’s plot is the way he makes Smike seem as if he is a completely peripheral and minor character, but eventually Smike becomes the trigger of the book’s climax.

The takeaway for me as a writer, reading Nicholas Nickleby, is that there is more to a story than the plot. There is the voice of the author, the writer’s sense of humor and satiric wit, and the heart of the writer as s/he sympathizes with the characters and analyzes society’s flaws. All of those, while not enough to make a long novel work by themselves, are more than enough to keep the reader going at moments when the plot lags, especially if that writer is Charles Dickens.

Zack’s most recent book of poems, Irreverent Litanies
Zack’s most recent translation, Bérénice 1934–44: An Actress in Occupied Paris by Isabelle Stibbe
How to Get Published
Getting the Most from Your Writing Workshop
How Not to Become a Literary Dropout
Putting Together a Book Manuscript
Working with a Writing Mentor
How to Deliver Your Message
Does the Muse Have a Cell Phone?
Why Write Poetry?
Poetic Forms: Introduction; The Sonnet, The Sestina, The Ghazal, The Tanka, The Villanelle
Praise and Lament
How to Be an American Writer
Writers and Collaboration
Types of Closure in Poetry
Posted by Zack Rogow at 6:06 PM No comments: