For this blog, I interviewed the poet Kip Zegers, whose new book, A Room in the House of Time, was recently published by Dos Madres Press. I first got to know Kip when he was the coordinator of the Park Slope Food Coop in the late 1970s. Later we helped start a writing group together, the Slow Motion Poetry Collective. I’ve always found Kip’s thoughts eye-opening.

Q. What craft issues do you feel you are still learning about as a poet? How do poets continue to polish their craft once they find a style that feels natural and authentic?
Kip Zegers: My sense is that techniques are what we figure out in order to write the next poem. After we have read a fair amount, and written, there are ways of going forward that we figure out to solve a problem. Some of these come from reading, others rise from the moment that drove us to work. One morning I was writing in my journal, and was holding a book in my other hand as I worked. Then I looked at what I was doing. I thought, Why am I holding Frank O’Hara in my otherwise empty hand? On that day, it was obvious that I had a question to answer and the style of that poem was new to me, as part of a brand new question. The poem turned out to be the final poem in A Room in the House of Time, and the book ends with O’Hara saying, “from here you find your own way home.” 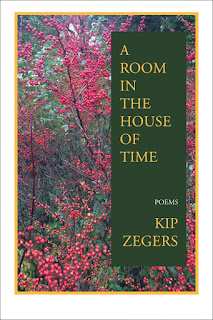 Other posts on writing topics:
How to Get Published
Getting the Most from Your Writing Workshop
How Not to Become a Literary Dropout
Putting Together a Book Manuscript
Working with a Writing Mentor
How to Deliver Your Message
Does the Muse Have a Cell Phone?
Why Write Poetry?
Poetic Forms: Introduction; The Sonnet, The Sestina, The Ghazal, The Tanka, The Villanelle
Praise and Lament
How to Be an American Writer
Writers and Collaboration
Types of Closure in Poetry
Posted by Zack Rogow at 5:36 PM 2 comments: