One of Rainer Maria Rilke’s most famous works is “Archaic Torso of Apollo.” In that short poem he solders together radical opposites. The Apollonian (pure abstract art) and the Dionysian (sensual, physical) are often thought of as opposites. But in his description of a statue of the god Apollo, Rilke uses Dionysian language to depict that artwork. He combines the cool energy of classic art with the hot energy of the body, and then Rilke pulls off one of the greatest endings in the history of poetry.

The word “archaic” in the poem’s title resonates in different ways. It refers specifically to the Archaic period in ancient Greek art from 600 to 480 B.C.E., when it was standard for sculptures of human figures to have a smiling face. In fact, that type of expression is called The Archaic Smile.

But the word “archaic” is also partly ironic in the title of this poem, since nothing could be as immediate as this statue the way Rilke describes it. The poem is contemporary in its diction, but it’s a Petrarchan sonnet, another fusion of opposites. I’ve tried in this new version of Rilke’s most frequently translated poem to bring out the poem’s oddly indirect directness (almost every statement except the last is a negative). I’ve also tried to include the poem’s sensuality, often censored in translation. To emphasize the impact of the poem’s last phrase, I’ve brought it into contemporary English. Here’s my translation:

We’ll never know the incredible head
where his eyes ripen like apples. No,
but that torso is a lamp, and in its glow
his gaze does appear, turned down instead,

but hovering, glistening. Otherwise the arc of his breast
wouldn’t dazzle you, and in the slight
twist of his loins a smile wouldn’t alight
in the center, where the virile parts nest.

Otherwise this stone would be stunted, marred
under those shoulders that plunge hard,
wouldn’t flicker like a wild animal’s coat;

wouldn’t burst from its edges, knife
like a star: there’s nowhere on him so remote
it doesn’t see you: you’ve got to change your life.

“Archaic Torso of Apollo” derives its force from a particular electricity generated when the directness of life collides with the distance of art. The one object Rilke describes in this poem, an ancient Greek statue of a male torso that he saw in the Louvre Museum in Paris, combines the vitality of the body and ripe fruit (the apple eyes) with the world of ancient art.
To me it seems that Rilke is deliberately emphasizing the sensuality of this statue, drawing our attention to its breast and crotch, comparing its glow to the pelt of a predatory beast.
The torso in Rilke’s poem may be buff, but it’s beheaded and de-sexed. It has neither the power of thought, nor the virility of its genitals, nor lips to kiss, nor arms to hold or legs to clench. 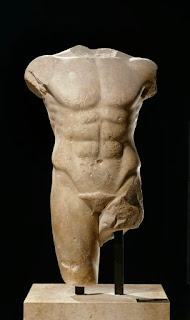 Then why does this broken block of stone mean that we must change our lives—demand that we change our lives? Rilke begins by telling us we can’t see the statue’s eyes, but then reverses direction by saying the torso can see us, with its nipples like eyes and its pelvis curving upward in a knowing smile. The poem continually picks up momentum as it displays the miracle of a headless body that looks at us, smiles at us, even pierces us with its invisible glance. The poem tells us that art strips us bare, throws light on the deepest caverns of our souls, and only when we accept that are we ready to change our lives and begin the trek of our destiny. But that knowledge also produces a smile, even in the most unlikely place: a headless torso.


Other recent posts about writing topics:
How to Get Published
Getting the Most from Your Writing Workshop
How Not to Become a Literary Dropout
Putting Together a Book Manuscript
Working with a Writing Mentor
How to Deliver Your Message
Does the Muse Have a Cell Phone?
Why Write Poetry?
Poetic Forms: Introduction; The Sonnet, The Sestina, The Ghazal, The Tanka
Praise and Lament
How to Be an American Writer