This week the San Francisco Bay Area received the very sad news that the wonderful actor, director, and arts administrator Barbara Oliver passed away on May 20, 2013. Barbara cofounded the Aurora Theatre in Berkeley, California, and served as its artistic director from 1992 to 2004. This blog is dedicated to Barbara. 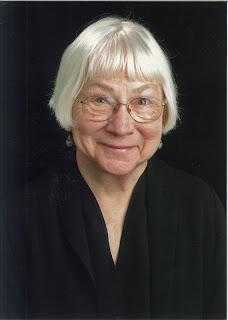 Here is a tribute to Barbara from one of her close collaborators, the writer Dorothy Bryant, author of the play Dear Master (which Barbara appeared in) and numerous novels, including the amazing The Kin of Ata Are Waiting for You and Confessions of Madame Psyche.

“The idea for Aurora Theatre Company began in the late 1980s with a luncheon conversation with Barbara (just turned 60) about the paucity of plays featuring older leading ladies. In my ignorance I offered to write a two person ‘reading’ based on the friendship between George Sand and Gustave Flaubert. (I had no idea of the work and the cost of what seemed like a modest effort to fill some time before Barbara got another role with a ‘real theater.’)

“A year of research later, plus another year of mostly unpaid public readings (followed by my rewriting) by Barbara and Ken Grantham (and other actors) transformed this ‘dialogue’ into a play, performed successfully at the Berkeley City Club, (where she [Barbara] was a trusted member), and the beginning of Aurora Theatre Company. Her achievement was monumental—a fact I learned (knowing nothing about how a play went from page to stage) as we moved along. I would never have attempted such a thing without Barbara’s staunch belief that it could work, and her willingness to do these readings, her incredible savvy about climbing all the hurdles to production, her use of contacts built by solid respect for her work at Berkeley Rep and other theaters. She was totally creative and totally practical. Whenever we hit a snag that might have made others give up, she would nod thoughtfully and then work her way toward a solution.

"Thanks to her I wrote five more plays that were performed here and in other cities. Barbara had taken what had seemed like a setback and transformed it into an opportunity to display and use all of her talents, which, with her quiet, unassuming manner, few people knew she possessed. I learned a lot from her.”

My own connection with Barbara also began through the play Dear Master. I was teaching a summer literature class for high school students at UC Berkeley in 1995, and we were reading a translation I’d done of the novel Horace by George Sand, and a novella by Flaubert. To make that period come to life for the students, I persuaded the university to host a reading of Dear Master, with Barbara recreating her role as George Sand. Barbara was so moving and wise and memorable in that part. She embodied George Sand.

After that Barbara supported my efforts at playwriting, which were very rough at the beginning. I was working on a play that consisted mostly of dramatic monologues, and Barbara gently informed me at one point, “It sometimes helps if the characters talk to one another when they’re onstage.” She was infinitely patient and read draft after draft of my plays, but she never failed to let me know when I could do better—had to do better. Barbara was a fantastic and enormously generous mentor, and she had a great respect for writers.

After retiring from the Aurora Theatre, Barbara couldn’t stop developing new plays, and she founded a reading series called Four New Ones, where each year she planned to direct staged readings of plays in progress. She only got through the first year because of commitments to act and direct for other companies.

She directed several staged readings of another play of mine, Things I Didn’t Know I Loved. I admired the way that Barbara worked with the actors, choosing people she respected highly, and letting them find their way into their roles.

I had a chance this week to speak with Barbara’s daughter, Anna Oliver, who is a costume designer. Anna shared a few of her memories of her mom.

“My mom’s dad was a missionary, a Northern Baptist preacher. When she was three years old, my mom went with my grandpa and grandma to India. She came back to the U.S. when she was seven, speaking Hindi.

“When my mom was very young she used to listen the Metropolitan Opera on the radio on Sunday afternoons. She wanted to be an opera singer. It was outside the norm for the world she grew up in to go on stage.

“There were several roles she performed that she talked a lot about. Studying drama at Carnegie Tech, she played Cordelia in King Lear. One of the roles she was most challenged by but most glad she did was in The Chairs by Ionesco, at the Aurora Theatre. She also enjoyed doing The Gin Game there opposite my dad, Bill Oliver, though it was somewhat harrowing because my dad was ill.

“In her directing, she did a lot of George Bernard Shaw, and adored it. She also directed Ibsen’s Ghosts at the Aurora—that was Babs at her best. She was very happy with the production of Wilder Times [short plays by Thornton Wilder] that she directed at the Aurora in 2012. The short Wilder play The Happy Journey to Trenton and Camden—a lot of that was informed by Barbara. She knew those folks.

“My mom always said that theater is a three-legged stool—the play, the production, and the audience. It can’t stand without all three of those. What struck me about her perspective was how much the audience mattered. My mom cared so much about writers and language, but theatre for her was communication to a purpose—to connect with an audience.

“She was generous and gracious, but it wasn’t all selfless. She did it because she loved the theater. She genuinely believed in the transformative power of theater.”
Posted by Zack Rogow at 12:13 PM