The poet and translator Olga Livshin has published a new book, A Life Replaced, that includes both her original writing, and new translations of the work of the great Russian poet Anna Akhmatova, as well as writing by a more recent poet, Vladimir Gandelsman. 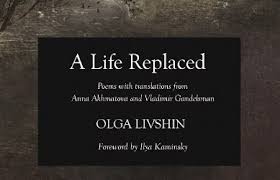 What makes this collection unique is that Livshin, who spent her childhood in the former Soviet Union and has since lived in the United States, engages energetically and creatively with the two poets she translates and with the countries she has lived in, asking thought-provoking questions about a range of topics.


Here is an example of one poem in the book where Livshin directly addresses the Akhmatova poem that comes before it in the collection, and uses that as a springboard to talk about history, Livshin’s own life, motherhood, and her reaction to the status quo in both the land of her birth and her adopted country.

Always the same question. What makes this century worse than any before it?—the twenty-year-old Anna asks in a poem.

Her century swelled with the inequities of all the previous ones.—I grew up there—at the end of the revolution that overflowed by seventy years—was rocked with her tight-lipped grief of her poems—quoted by my mother, who had her face—whose face I now wear.

What news for her would make an adequate reply?

News: I have now lived most of my life in a country that, as Akhmatova would say, is relatively vegetarian.—People aren’t the main staple of its diet.—Immigrants the world over say, We didn’t come to this country, that country, or that country—any country but—to mourn our lives.

But the country where I went to high school, college, and grad school, where I later taught at my alma mater—school is one of the favorite dishes.—Routine cannibalism.—Bomb threats: we were evacuated into the parking-lot sunshine.—Spit three times over the shoulder: you and you, but not you, will avoid being eaten.

News: After three days in labor, I saw my son. Warmth rushed through me as I lay cut up, belly-up.—I said: We’ll have so much fun together, you and I.

The word fun thus entered my overcast Russian worldview.—Every day I meet him after school: he colors the world cerulean.

Anna Andreyevna’s son spent most of his life in a prison camp.—Because of his origins.—She could not rescue him even by writing odes to Stalin.—Most Russian readers do not know, or else cannot remember, whether she wrote such odes.—She did.

Sort-of-new news: this country never stopped being carnivorous.—America’s eye, more technologically avian, looks into every home.—News: we might need a different word than home.

In the home of her poetry, Akhmatova has found room for her whole country.—Found a chronology: from lush turn-of-the-century eroticism to imprisonment—to oblivion, intended—but not accomplished—by the state.—In her stance of the memory keeper, she stood immovable.—Like a steppe baba statue: Paleolithic, gray; huge.

At the end of her life, Akhmatova said: My life had been replaced.

News: A few years back, a young woman in Moscow founded the first hospice for children in Russia.—This woman, a friend of mine, is now in her early thirties, a seasoned administrator for the hospice, somewhat cynical.—Her hospice, that colorful refuge, is still alive.—

Because my replies are like light touch, their comfort cool and faithless, each fingertip a raindrop.—I refuse to be separated from her: to sum her up.—She is needed.

Who, me? you ask. You seem amused.

Your rhetorical questions are needed, for they demand a specific integrity from each of us.—Your stone house of womanhood is needed, a house of protest.

You are the one with the news for this next century: This century is worse than those before it. Change something.

How to Get Published
Getting the Most from Your Writing Workshop
How Not to Become a Literary Dropout
Putting Together a Book Manuscript
Working with a Writing Mentor
How to Deliver Your Message
Does the Muse Have a Cell Phone?
Why Write Poetry?
Poetic Forms: Introduction; The Sonnet, The Sestina, The Ghazal, The Tanka, The Villanelle
Praise and Lament
How to Be an American Writer
Writers and Collaboration
Types of Closure in Poetry
Posted by Zack Rogow at 1:30 PM