How to Be an American Writer: Part 1—Introduction

This series of blogs is about how U.S. authors have defined themselves in relation to American society, and what we can learn from different approaches to the question of how to be a writer in the United States.

U.S. writers have often viewed their role in reaction to, or in opposition to, certain currents in our society. There is that great mass of North America that lives seemingly only for the next football game or the upcoming trip to Disneyland or Universal Studios—a pretty banal existence, in my opinion. It’s partly the banality of American life that writers are bucking—the lack of culture and sophistication.

Another current that poets and writers have rebelled against is the Puritan foundations of U.S. society. What is the Puritan mindset? Cotton Mather (1663–1728) was a Boston, Massachusetts, writer who helped both to instigate and apologize for the Salem witch trials.

In his book, A Discourse on the Wonders of the Invisible World, Mather wrote: “Behold, Sinners, behold and wonder, lest you perish: the very Devils are walking about our Streets, with lengthened Chains, making a dreadful Noise in our Ears, and Brimstone even without a Metaphor, is making an hellish and horrid stench in our Nostrils. I pray leave off all those things whereof your guilty Consciences may now accuse you, lest these Devils do yet more direfully fall upon you.”

I’m amazed at how real the forces of sin were to the Puritans. “Brimstone even without a metaphor…” Brimstone is another word for sulfur, and the idea that burning sulfur was present in our streets—well, it’s hard to comprehend.

That Puritanical streak may have its roots in the colonies of the seventeenth century, but it is very much alive today in every state of the United States.

Another strain in U.S. culture that writers often rebel against is the obsession with work and business to the exclusion of all other activities. As President Calvin Coolidge famously put it in 1925, “The chief business of the American people is business.” What else is there in life besides work and making money? 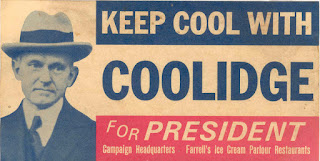 In the next blog, I’ll discuss expatriate writers, artists who have reacted to mainstream American culture by leaving the country and living abroad.

Other recent posts about writing topics: How to Get Published
Getting the Most from Your Writing Workshop
How Not to Become a Literary Dropout
Putting Together a Book Manuscript
Working with a Writing Mentor
How to Deliver Your Message
Does the Muse Have a Cell Phone?
Why Write Poetry?
Poetic Forms: Introduction; The Sonnet, The Sestina, The Ghazal, The Tanka, The Villanelle
Praise and Lament
How to Be an American Writer
Writers and Collaboration
Types of Closure in Poetry
Posted by Zack Rogow at 5:10 PM

Email ThisBlogThis!Share to TwitterShare to FacebookShare to Pinterest
Labels: A Discourse on the Wonders of the Invisible World, business of America is business, Calvin Coolidge, Cotton Mather, Disneyland, Puritanical, Puritans, Universal Studios