Acclaimed children’s writer Marilyn Sachs passed away on December 28, 2016. Author of more than forty books, Marilyn played an important role in children’s literature as it moved from the idealized and sentimental stories of the 1950s to the more realistic situations and multidimensional characters that developed in the 1960s and beyond. Her books inspired deep loyalties in children who strongly identified with her heroines. Marilyn was also my literary mentor during the time she was my mother-in-law from 1986 to 1998.

When I think about Marilyn I always recall the apartment where she lived for more than four decades on 31st Avenue in the San Francisco’s Richmond District. That flat was a temple to art, filled with the wonderful woodcarvings of female figures by her husband of seventy years (yes, seventy years!), the sculptor and political activist, Morris Sachs. All of Morris’s statues have Marilyn’s wide hips.

The Sachs apartment also held many works by artists whom Marilyn and Morris had befriended once they moved to the Bay Area in 1960: a print of farm workers in a field by Emmy Lou Packard; and furiously charcoaled figures by Ethel Weiner Guttman. There were Navajo blankets on the walls of the dining room, and Persian carpets on the parquet floors, as well as a table in the breakfast room that Morris himself crafted from a redwood tree burl.

In that apartment, Marilyn entertained a river of guests. A master of the art of conversation, Marilyn could draw out the shyest person. She was not afraid to toss in her two cents with even the most gregarious visitors. Marilyn once taught me that you could tell how interested a person was in what you were saying by their occasional unconscious replies. “Uh huh, uh huh,” means polite interest, but the person is mostly bored, and you should change the topic. “Yeah, yeah,” on the other hand, means “Tell me more!”

There were always travelers passing through San Francisco having tea or dinner at the Sachs’s apartment. Marilyn was the most entertaining of hosts, keeping everyone laughing with her sharp witticisms delivered with her unpretentious, New York accent.

Marilyn’s work as a writer was evident in her study, which had an entire wall decorated with photos and letters sent by devoted fans who had written personal appreciations of her books. Her novels particularly appealed to what is oddly called in the trade, “the middle-aged child”—kids from 10 to 14—pre-teens. Marilyn understood that age group extremely well, partly because she could recall so many great anecdotes from her own life during those years, anecdotes that often found their way into her novels.

At the time Marilyn started writing, children’s books in the 1950s were often artificially sweet and innocent, particularly those with female main characters. These novels often portrayed unrealistic, idealized situations. I’m thinking, for example, of Sidney Taylor’s All-of-a-Kind Family, published in 1951, with five sisters whose worst problem seemed to be finding a misplaced a library book.

Marilyn spent many years as a children’s librarian in the Brooklyn and San Francisco Public Library systems. In New York, she worked on a bookmobile that brought reading to far-flung neighborhoods, many not near a local library. She became convinced that real children needed more naturalistic fiction that reflected their real-life problems.

Marilyn wrote her first book, Amy Moves In, around 1954, but the novel was so unlike most of the children’s literature of the time that it took her ten years to get the manuscript published. In that book, the mother of the two sisters is hit by a car, and the girls have to become self-sufficient in a way that many children must do when there is an absent or ill parent. Amy Moves In is still in print five decades later.

Marilyn also depicted Jewish American characters in a way that no other children’s writer had done before. In All-of-a-Kind Family, for instance, the main characters seem to be incessantly lighting candles for Hanukah or Shabbat. Marilyn showed the lives of American Jews as she knew it from growing up on the tough streets of the South Bronx in New York City.

Among my personal favorites of her books is Call Me Ruth, a historical novel about a girl whose single-parent father is a labor leader in the garment industry in the early 1900s in New York. 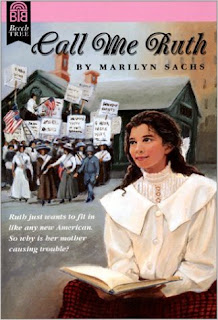 Although Call Me Ruth is a deeply sympathetic and well-researched portrayal of the trade union movement, the character of the mother is complex and believable. She’s a true crusader for social justice, but a neglectful mom. This is just one of her books that shows the influence of the great novelists, such as Charles Dickens, Jane Austen, and Willa Cather, whose work she read over and over with enormous enjoyment and profound understanding of how those authors structured their fictions.

Another favorite of mine is one of Marilyn’s last books, The Four Ugly Cats in Apartment 3D. This novella is about a girl who finds several cats abandoned by a neighbor and has to get them all adopted quickly to prevent them from being put down. It’s interesting that the apartment number is 3D. Marilyn is a three-dimensional children’s writer if ever there was one. She expertly combines humor and pathos—for me, the signature of the best writers.

In addition to being an award-winning and enormously prolific writer, turning out more than a book a year during her prime, Marilyn was also a mentor to many authors and illustrators. Judy Blume credited Marilyn with being both an inspiration and a help to her when she was first attempting to get her own groundbreaking and realistic fiction published. Marilyn was also an influential member of a circle of talented children’s book authors and illustrators in the San Francisco Bay Area that included Beverly Gherman, Susan Meyers, Maxine Rose Schnur, Susan Terris (also a poet and editor), and Ashley Wolff.

Marilyn was also a mentor to me. I attempted, unsuccessfully, to write my own young adult novel, in emulation of her accomplishments. When I showed Marilyn the manuscript, she had one cryptic and wise comment I’ll never forget: “Don’t try to tie up all the loose ends.”

Other recent posts on literary topics:
How to Get Published
Getting the Most from Your Writing Workshop
How Not to Become a Literary Dropout
Putting Together a Book Manuscript
Working with a Writing Mentor
How to Deliver Your Message
Does the Muse Have a Cell Phone?
Why Write Poetry?
Poetic Forms: Introduction; The Sonnet, The Sestina, The Ghazal, The Tanka, The Villanelle
Praise and Lament
How to Be an American Writer
Writers and Collaboration
Types of Closure in Poetry
Posted by Zack Rogow at 10:22 AM