In the first two blogs in this series, I’ve talked about collaborations where an artist, such as an illustrator or composer, interprets the work of a writer. I’ve also discussed projects where a writer repurposes text already written, for instance, turning a poem into a children’s picture book.

In this post I’m going to talk about two or more writers working together to create a new work. One area where I’ve done this quite a bit is literary translation.

The first book that I translated was a collaboration with writer/translator Bill Zavatsky. 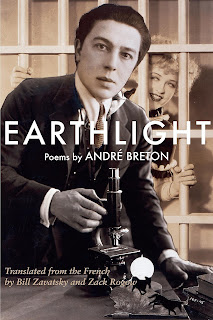 It’s a funny story how this collaboration began. In the late 1970s, I was a young poet just starting out, living in New York City. Bill Zavatsky was a relatively established writer—two books of Bill’s poems were in print and he was the publisher of two literary magazines, Sun, and Roy Rogers. The latter was a wild child of Sun for special projects such as the memorable 100-page issue devoted entirely to one-line poems.

I was a totally unknown writer (mostly I still am!), living in a fifth-floor walkup in the East Village with a bathtub in the kitchen. At the time, I was going out with another poet, a woman named Susan, who was taking a creative writing workshop with Bill Zavatsky at the Poetry Project at St. Mark’s Church. I was translating early poems by the French surrealist, André Breton, because I loved them, and because I wanted to hear what Breton’s unbridled stream of consciousness sounded like in American English.

Susan knew that Bill had an interest in Breton and she urged me to send a few of my translations to Bill for publication in his magazine, Sun. I did. Months went by. I heard nothing.

Then in the summer of 1977, Susan and I crashed a publication party at the Gotham Book Mart on West 47th Street, ironically in the heart of the diamond district where Hassidic jewelers sold stones for engagement rings. I think the book being launched that day was John Ashbery’s poetry collection Houseboat Days. I knew almost no one at the party (certainly not John Ashbery!) There were a few familiar faces, as anonymous as mine, but Susan spotted Bill Zavatsky in the crowd. I was too shy to talk to him—after all, Bill actually was chatting with John Ashbery. Susan literally pushed me to approach Bill about my Breton translations.

I did talk with Bill, and to my amazement, the reason he hadn’t gotten back to me about my translations was not because he hated them, but because he had been extremely busy. Bill suggested that since he was also translating poems from the same period in Breton’s work, we should collaborate on translating a book of Breton’s poetry.

A lesson here for less established poets—you may have more to bring to a collaboration than you think. Although Bill was a widely published poet, editor, and translator, he had not studied French for as many years as I had or spent as much time in France. I did have something to bring to the mix. We also had a similar vision of creating a version of Breton informed by the language of the Beat Generation and the New York School writers who had been influenced by the surrealists. (Read Breton’s poem “Free Union” and then Allen Ginsberg’s “Howl” and you’ll see what I mean.)

Bill and I set about to translate roughly two hundred pages of Breton’s collection Earthlight (Clair de terre), including many of the surrealist’s best poems. For me, the collaboration was an apprenticeship. Bill was the older and more experienced poet and he brought a wealth of knowledge about the practice of translation that I learned a great deal from. He was also more widely read.

But for Bill, I think it was useful to have someone on the team who had a firm grounding in French grammar, vocabulary, and culture, and could say, “Breton is probably referring to the town of Pont-à-Mousson because most of the manhole covers in Paris are made in that town and are stamped with that name.”

Collaborations between writers are not symmetrical. If every writer brought the same set of skills, we wouldn’t need to collaborate. Different writers bring different knowledge to the mix. On the other hand, there has to be some common ground for the writers to compromise and enjoy one another’s work.

Bill and I worked on the translation of Breton’s Earthlight off and on for seventeen years. Through many vicissitudes, we always kept our vision for the book in sight. When Earthlight finally appeared in print for the first time in 1994, it won the PEN/Book-of-the-Month Club Translation Award, which at that time was the annual prize for the best translation into English.

I’m excited to announce that our translation of Earthlight by André Breton has just been re-released by Black Widow Press. The new edition not only includes the French text en face for the first time, it has an updated introduction and notes that Bill contributed, incorporating the latest scholarship from France on Breton and his sources.

I’m delighted to see the book finally published as Bill and I had first imagined it forty years ago. This edition is bilingual with extensive notes to provide background on Breton’s encyclopedic interest in the occult, politics, botany, zoology, art, and history, and the way they infused his wild and passionate poetry.

My collaboration with Bill Zavatsky not only led to the publication of Earthlight, it was the beginning of a beautiful friendship.


Zack’s most recent book of poems, Irreverent Litanies
Zack’s most recent translation, Bérénice 1934–44: An Actress in Occupied Paris by Isabelle Stibbe
How to Get Published
Getting the Most from Your Writing Workshop
How Not to Become a Literary Dropout
Putting Together a Book Manuscript
Working with a Writing Mentor
How to Deliver Your Message
Does the Muse Have a Cell Phone?
Why Write Poetry?
Poetic Forms: Introduction; The Sonnet, The Sestina, The Ghazal, The Tanka, The Villanelle
Praise and Lament
How to Be an American Writer
Writers and Collaboration
Types of Closure in Poetry
Posted by Zack Rogow at 2:04 PM