Giving Yourself the Benefit of the Doubt as a Writer

Many writers begin their literary careers with more enthusiasm than finesse or depth. There are a couple of reasons it can take years or even decades to hit your stride as an author. Sometimes writers need time to excavate their souls to find their true subject matter. That’s not as easy as it sounds, because it involves burrowing toward the truth about one’s life, which often necessitates several wrong turns and painfully acquired life experience.

It can also take you many years to polish the craft of writing. I know that phrase gets thrown around a lot, to “polish your craft.” But it’s true that the art of writing is not something most of us are born knowing. It takes practice, and learning from your mistakes and from role models. You gradually grow to see where your work succeeds, where it needs improvement, and what you can do that no one else can. To write consistently well, you have to develop self-awareness about your own strengths and weaknesses, and that can take perspective, and perspective usually requires time.

For all those reasons, you have to give yourself the benefit of the doubt as a writer. You may not start out writing the work you were destined to write, or you may not have the skills when you start out to execute the types of projects you have in your mind and heart. 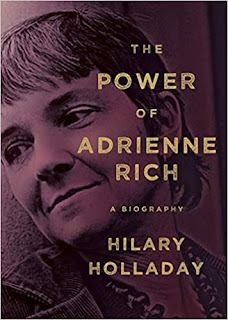 Holladay talks about how Adrienne Rich was already a lauded poet when she was an undergraduate at Radcliffe College and won the 1950 Yale Series of Younger Poets award for her first book, A Change of World. Rich went on to win many other honors as a young poet, but it wasn’t until she published Diving into the Wreck in 1973, her eighth book of poems, that she really came into her own as a writer. It was in that book she emerged as a leading feminist and social critic, and she continued in that direction for the rest of her astonishing and wonderful career.

If Adrienne Rich had judged her own potential as a writer only by the output of the first two decades of her career as a poet, she might have given up. It was by allowing herself the time to grow as a poet and thinker that she became the great artist she was.

In fact, as Holladay points out in her biography, Rich was surprisingly grateful to the poet Randall Jarrell for his criticism of her work in the Yale Review when she was still producing her youthful volumes of poetry. Jarrell saw the potential behind the preciousness and formal neatness that sometimes diluted the power of Rich’s earlier books: “she lives nearer to perfection (an all-too-easy perfection, sometimes…) than ordinary poets do…one feels she has room to live in and grow out into; liking her for what she is is a way of liking her even better for what she may become.” He challenged Rich to become the best poet she could be.

What can we learn from Rich’s decades-long quest for her own purpose and majesty as a poet? We need to be patient with our own development as writers. That doesn’t mean becoming lazy or complacent. Adrienne Rich was the opposite of that. She worked unbelievably hard to become the writer she grew into. It does mean allowing yourself the time to produce the works that you were meant to bring into the world.