Gwen Strauss is a nonfiction writer as well as an award-winning children’s book author and poet. Her newly published nonfiction book The Nine is currently in development for a TV series. Strauss’ other titles include Trail of Stones, The Night Shimmy, Ruth and the Green Book, and The Hiding Game. She lives in Southern France where she is the director of the Dora Maar House and Hôtel de Tingry, an artist residency program and cultural center.

Zack Rogow: The core story of this book, the escape of nine fearless women Resistance fighter prisoners from Nazi Germany, takes places in only a few days. The women also have backstories and “front stories” about how they came to be arrested, and what they did after World War II. How did you weave the front- and backstories into the narrative of their escape?

Gwen Strauss: The actual journey of the escape takes nine days and there are nine women, so from the beginning I thought this would be a great structure, if I could pull off pairing one woman’s story with each day. I ended up mapping it out with index cards the old-fashioned way, on a cork board. I had to maneuver things to keep the story moving, at times shifting to the backstory of the woman that chapter was dedicated to. I realized I couldn’t tell the story in exactly nine chapters, so I had to be more flexible with my structure. I also needed to tell what happened after the war. And for the final drafts, I had the excellent help of my editor Elisabeth Dyssegaard—I owe a lot to her. She was rather ruthless cutting sections, but I realized she was right about keeping the momentum of the story going forward. 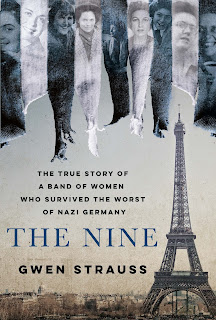 Q. One thing I learned from this book was the key role that women played in the Resistance to the Nazis. Could you talk about that?

Yes, I had a lot MORE about women in the Resistance in earlier drafts—whole sections about amazing women like Milena Jesenská, Danielle Cassanova, Geneviève de Gaulle-Anthonioz, Germaine Tillion, Odette Rosenstock. I could have just written about all these somewhat forgotten heroes. It’s important to realize that women in France got the right to vote only in 1944, because of the contributions they made in the Resistance. De Gaulle realized they had to be recognized as citizens. Women had a certain freedom during the occupation—more than the men. They could move around. A young man would be stopped and asked why he wasn’t in Germany working for the German war machine. And so little was expected of the women—the Germans didn’t think they were capable of sabotage and undercover work. Marie Madeleine Fourcade, who ran the largest network of agents, kept secret for a long time that she was a woman from both the English she was working with, and of course the Germans.

Q. You are personally involved in the story of The Nine through a family connection. Could you talk about how that story finally emerged after many years?

My great aunt Hélène told me her story one day quite casually over lunch. She was nearing the end of her life and was ready to talk about it. Because I was a somewhat distant relative, she felt she could open up to me. She hadn’t even told the story to her own daughter. This was something I found again and again as I met the families of these women. They told their grandchildren or nieces or nephews, but almost never did they speak about the experience of the concentration camps to their own children. And most spoke later in life. Immediately after the war there was a general understanding that it wasn’t to be spoken of; everyone was trying to put the dark past behind them. Many women spoke up much later when there started to be Holocaust deniers. The women couldn’t stand by and let history be erased, and many said it was for the women who had died in the camps that they finally spoke up.

Q. I understand the book is going to be made into a TV series scripted by the renowned playwright Ella Hickson. What was the process of turning a nonfiction book into such a different medium?

I knew nothing of this process, and it has been a huge pleasure to work with Ella. First, we just talked for hours and hours about the women. She asked me questions and I could talk forever—so much information is not in the book. Then later she had a rough map of how she might write the script. She came back to France where I live and we spent a few weeks together. In the morning we met and talked through each beat and episode, trying to figure out how to structure it, what stories would work, what wouldn’t. In the afternoons she wrote. We took lots of liberties with the factual story. Ella really has a sense of this as a playwright—how to tell a story through scenes and dialogue. I absolutely admire how she thinks and works. She wrote a treatment and submitted it to the production company. They had notes and we did another round of edits and brainstorming. So that’s where we are now. The treatment is quite different from the book. And it very much Ella’s voice. I love it. I really hope we can make it into a series. What is fun is seeing how the stories evolve, what is essential stays in. I trust Ella, and that’s a great feeling. I love working with someone I know is a really great writer.

Q. At the point where you decided to write this book, how many of The Nine were still alive and who were you able to interview directly? How did you incorporate other sources while keeping a consistent narrative voice?

Sadly, when I really started to write the book, all nine had died. I discovered the identity of the last one and found she had only died a few months earlier. It was like chasing a retreating wave. I only spoke with Hélène, my aunt. I spoke with family members or friends of all the others except Josée. I found no one to speak about Josée. I did find written accounts from three of the women and several hours of oral testimony from one of them. Then I found other women who wrote about the same experiences who were with them. In all, I was able to piece together the different accounts.

Q. It would seem as if a concentration camp would be the most unlikely place for acts of kindness or solidarity, but your book includes extraordinary examples of these among the women prisoners of Ravensbrück. How did you discover these stories, and what impact did these have on you?

Yes, these acts of solidarity were amazingly moving for me. I found that women were more prone to work together as a group, to see that as a tool of survival, then the men were. Maybe men were conditioned to think of “every man for himself.” Women tended to form camp families and take care of the weakest. I also have been thinking that vast organized cruelty is a sort of function of power and the state—whereas true humanity and compassion can only happen on the individual level. It’s a kind of muscle that has to be engaged. I can’t say it enough, people in extreme desperation did extraordinary acts of kindness. I don’t want to forget this. I found a quote from the musician Nick Cave recently that sums it up: “At the heart of grief, and midst of mayhem, carnage and deep sadness, people do beautiful things.”

Q. You not only give an account of the historical facts, you create the characters of The Nine, and their relationships with one another. How were you able to get a handle on the more psychological, less fact-based aspects of the story?

This was tricky. I struggled with this until I gave myself permission to imagine my way into their story. It’s not a strict historical narrative. I argue that it is nearly impossible to do that when you are writing about people marginalized in the historical archive. It’s also a problem historians confront with African American enslaved narratives. How to give voice to the voiceless? I was inspired by Saidiya Hartman’s Wayward Lives, Beautiful Experiments. I was also inspired by a Jamaican artist named Jacqueline Bishop who has searched the archives for actual quotes from enslaved Caribbean women. There are only fragments, but she embroidered these fragments onto sackcloth that was the fabric they were given for their clothing. She uses this beautiful needlework (again something women did, not valued or considered real art) and uses that act to give voice.

Q. You used many different kinds of sources for this book—interviews, journals, memoirs, archival information. How did you create a consistent narrative voice?

This is a hard question, because I’m not sure. Writing and rewriting over and over and having a good editor. I easily wrote 50 drafts.

Q. When you visited the site of the women’s journey in Germany, what was that like as an emotional experience? What did you learn from that trip?

Yes, very emotional. I did two trips to trace their route. One just as I was beginning, before I really knew I would write a whole book about it. And the second one, a few years later, when I was deep into the story. On the second trip I had a better idea of what had happened where, and that was really moving. I was with my sister. I realized with a shock how little ground they covered each day. They were exhausted and so broken during the nine days of their escape. They needed food and rest. Some days they only covered only five kilometers (three miles). Seeing the bridge, or really the Mulde River they had to cross on a broken bridge—I found the repaired bridge and it was impressive to imagine.

Q. Of the nine women who are the focus of the book, whose stories particularly resonated with you?

I really admired Nicole. I think she was able to take what had happened to her and transform her life. She said that after, without having gone through what she went through, she never would have had the career she had after the war as a feminist. And I also grew to really like Mena. Mena didn’t have a very great marriage and she died young from cancer, but I liked the way she lived passionately. I think if she had found the right husband, or if she had come from another social class, she would have been an artist. I would have loved to read the account she would have written. But I think I found something in each of them I really admired.