The influence of East Asian literature on Western poetry is international and widespread. This influence bridges a variety of artistic movements that seem unrelated or even antithetical at first. You might even say the influence of East Asian literature is a defining quality of modernism in the West.
In this series of blogs, I’m going to talk about three modern writers whose work was shaped in different ways by the writing of East Asia.
These poets from different parts of the world all used East Asian literature as an inspiration to move their own work forward in ways that would not have been possible without this literary legacy. The three writers are the Russian poet Anna Akhmatova; the French modernist poet Jean Follain; and the U.S. writer of the Beat Generation, Jack Kerouac.
How did East Asian literature begin finding its way into the West? In the late nineteenth century, particularly in France, there was a craze, a hunger for all things East Asian. This artistic sensibility had a name. It was called Le Japonisme, or Japonism, although it referred not only to the arts in Japan but to all of East Asian art.
I first became aware of the depth of this influence when I toured the home of the Impressionist painter Claude Monet in Giverny, France.

I’m sure you’ve seen the images of the Japanese-style moon bridge in his garden that Monet painted almost obsessively. But when you enter Monet’s house, the influence of East Asian art is even more evident. Every image on every wall is a Japanese print of the Ukiyo-e masters. Monet owned no fewer than 117 Japanese prints, works by the artists Utamaro, Hiroshige, and Hokusai.
We could easily trace the same line of influence from East Asian art to the paintings of Vincent Van Gogh:

or the posters of Henri Toulouse-Lautrec, just to give a few examples.
But what does this influence in the visual arts have to do with literature? There was a literary Japonisme as well, a craze for all things East Asian in poetry.
This interest in East Asia became particularly popular with Judith Gautier’s Le Livre de jade: poésies traduites du chinois [The Book of Jade: Poetry Translated from the Chinese]. 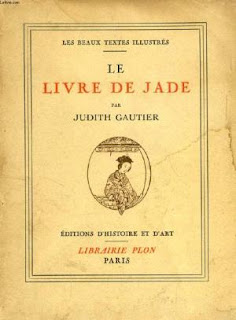 The Book of Jade is a volume of classical Chinese verse translated into French, with illustrations and reproductions of prints and calligraphy. 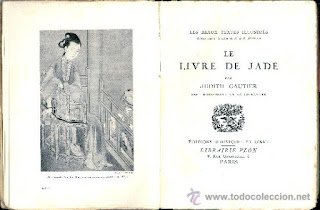 Gautier’s anthology made an enormous splash when it was first published in Paris in 1902, but it was not the first or the only one of its kind. There have been many books that have popularized Eastern poetry for the West, published at key moments. Even before Le Livre de jade, collections of Chinese and Japanese classical poetry started appearing in France as early as 1862, with the Marquis de Saint-Denys’ Poésies de l’époque des Thang [Tang Dynasty Poetry], published in Paris.


An anthology of Japanese poetry appeared in Paris in 1871: Anthologie japonaise: poésies anciennes et modernes [A Japanese Anthology: Ancient and Modern Poetry], edited by Léon de Rosny. This collection featured a number of traditional tanka or waka, including poems with the typical subject of a lover waiting in vain for a beloved, a topic that we will see popping up in Western poetry as well.

This series of blogs was originally written as a talk for the First Asian Literature Festival, Gwangju, South Korea, November 2017.

Other recent posts on writing topics:
How to Get Published
Getting the Most from Your Writing Workshop
How Not to Become a Literary Dropout
Putting Together a Book Manuscript
Working with a Writing Mentor
How to Deliver Your Message
Does the Muse Have a Cell Phone?
Why Write Poetry?
Poetic Forms: Introduction; The Sonnet, The Sestina, The Ghazal, The Tanka, The Villanelle
Praise and Lament
How to Be an American Writer
Writers and Collaboration
Types of Closure in Poetry
Posted by Zack Rogow at 2:52 PM