I love the work of Willa Cather. I was introduced to her books by the children’s writer Marilyn Sachs, who pointed out to me that Cather is much deeper than the feel-good chronicler of the American West that middle school kids encounter when assigned My Ántonia or O Pioneers! Both of those are good novels by Cather, but they don’t compare with her more mature books such as A Lost Lady and The Professor’s House. 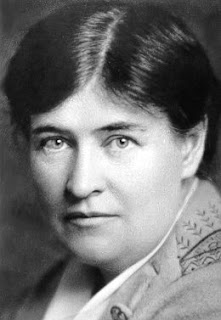 Cather was a late bloomer as a fiction writer. She earned her living during her early decades writing for, and then editing, women’s magazines. She didn’t really hit her stride as a novelist till she was in her fifties in the 1920s (a good lesson for those of us starting our writing projects later in life). Her work grew darker and more complex in that decade. You have to read all her books to get a sense of her incredible mastery of character, plot, and description.

She has an amazing eye for the unique characters and landscapes of the American West. Here’s a description from The Song of the Lark, one of her most autobiographical books: “Every rabbit that shot across the path, every sage hen that flew up by the trail, was like a runaway thought, a message that one sent into the desert.” The topography is so specific to the West, and yet conveyed in a way that any reader can visualize.

Her descriptions are like portraits by a great painter: “Frizzy bangs were worn then, but Mrs. Kronberg always dressed her hair in the same way, parted in the middle, brushed smoothly back from her low, white forehead, pinned loosely on the back of her head in two thick braids. It was growing grey about the temples, but after the manner of yellow hair it seemed only to have grown paler there, and had taken on a colour like that of English primroses.” I love the primroses! This portrait gives you a strong sense of a woman who takes pride in herself without needing to be trendy, a woman who is not young, but is worthy of our attention. This passage is also from The Song of the Lark.

Cather certainly knows her characters, their quirks, and their beauty. Here’s her description from the same novel of Ray Kennedy, a railway worker: “Ray had a collection of good stories. He was observant, truthful, and kindly—perhaps the chief requisites in a good storyteller.” Tells us a lot about Cather’s own values as a writer. She goes on to describe Ray’s background: “Never having had any schooling to speak of, he had, almost from the time he ran away, tried to make good his loss. As a sheep-herder he had worried an old grammar to tatters, and read instructive books with the help of a pocket dictionary.” What a great verb there, “worried”!

But there’s more: “By the light of many campfires he had pondered upon Prescott’s histories, and the words of Washington Irving, which he bought at a high price from a book agent.” No detail is without purpose. Every morsel of information tells how this man without means educated himself, and applied his keen mind to all he read. She tells us also about the complexity of Ray’s thoughts, and how knowledge was a two-edged sword for him: “Ray was a free-thinker, and inconsistently believed himself damned for being one. When he was braking down on the Santa Fé, at the end of his run he used to climb into the upper bunk of the caboose, while a noisy gang played poker about the stove below him, and by the roof-lamp read Robert Ingersoll’s speeches and The Age of Reason.” Robert Ingersoll was a nineteenth century abolitionist and agnostic orator who delivered the eulogy at Walt Whitman’s funeral: “Whitman announced the gospel of the body,” said Ingersoll. The Age of Reason is Will Durant’s history of the Enlightenment. Even though Cather is creating a regional Western landscape, she is dealing with the larger issues of the day.

Cather’s novel A Lost Lady is also remarkable. The book has one of the most convincing male narrators any female author has ever created. Halfway through the plot, the reader has one impression of the main characters, for good reasons. Cather then turns the tables upside down, and by the end of the book, the reader comes to exactly opposite conclusions, also for good reasons. In The Professor’s House, published in 1925, she wrote about the Anasazi Indians with as much sympathy and understanding as any person of European descent has ever done. I can’t stop reading Willa Cather, because I can’t stop trying to absorb the many lessons that her books hold for writers.

I'm excited that the letters of Willa Cather, long unavailable, have recently been published. More writing by this great author, so long after her death, is great news.