George Orwell is one of those writers whose work compels me so much I had to read it almost from beginning to end. Orwell is one of the few authors who attained the status of having an adjective formed from his name (ironically, Orwell was the opposite of Orwellian). 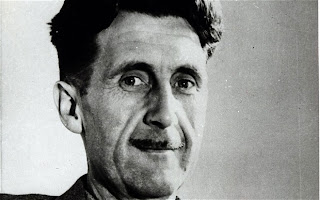 What appeals to me over and over in his writing is that he is an author of such consummate integrity that everything he creates radiates that quality. He was uncompromising in advocating for the working class and those suffering from imperialism. That was not an easy thing to do in the England where he grew up, class stratified and wedded to the notion of world empire. But he was also unflinching in calling out those on the left who supported totalitarian practices. His diatribe against sloppy writing as sloppy thinking, “Politics and the English Language,” is an essay I read again and again to remind myself never to get drowsy when I write and slump into cliché language. His six rules for writers are my Bible:

"(i) Never use a metaphor, simile, or other figure of speech which you are used to seeing in print.
(ii) Never use a long word where a short one will do.
(iii) If it is possible to cut a word out, always cut it out.
(iv) Never use the passive where you can use the active.
(v) Never use a foreign phrase, a scientific word, or a jargon word if you can think of an everyday English equivalent.
(vi) Break any of these rules sooner than say anything outright barbarous.”

Some of my favorites of his books are ones that don’t get read as often as his popular Animal Farm and 1984. I love his book The Road to Wigan Pier, which the Left Book Club commissioned Orwell to undertake. To write the book, Orwell lived with working class families and described their daily travails in a vivid and lively style. Chapter 2 on coal mining is one of the most gripping pieces of descriptive prose I’ve ever read. Here’s part of how he describes a coal mine in the British Isles: “Most of the things one imagines in hell are there—heat, noise, confusion, darkness, foul air, and, above all, unbearably cramped space.” His portrayal of the work of a miner is unforgettable: “It is a dreadful job that they do, an almost superhuman job by the standard of an ordinary person. For they are not only shifting monstrous quantities of coal, they are also doing it in a position that doubles or trebles the work. They have got to remain kneeling all the while—they could hardly rise from their knees without hitting the ceiling—and you can easily see by trying it what a tremendous effort this means. Shovelling is comparatively easy when you are standing up, because you can use your knee and thigh to drive the shovel along; kneeling down, the whole of the strain is thrown upon your arm and belly muscles. And the other conditions do not exactly make things easier. There is the heat—it varies, but in some mines it is suffocating—and the coal dust that stuffs up your throat and nostrils and collects along your eyelids, and the unending rattle of the conveyor belt, which in that confined space is rather like the rattle of a machine gun.” That last amazing metaphor clinches a description that would prod even the toughest heart.

I also love Orwell’s Homage to Catalonia, my favorite book about the Spanish Civil War. Orwell’s Spanish Republic is not idealized, or at least not idealized in the way that most accounts are. He shows the ideological splits in the republic, and how they led to infighting that did nothing to help the cause. His account of trench warfare and what it’s like to get shot is surprising and unforgettable.

One quality in Orwell that keeps bringing me back to his work is his ability to stay enraged against injustice. He is never dulled by his experiences. He never chooses an easy metaphor. His language is always as sharp as a box-cutter.