There are so many qualities I admire in June Jordan’s work that it’s hard to know where to begin. 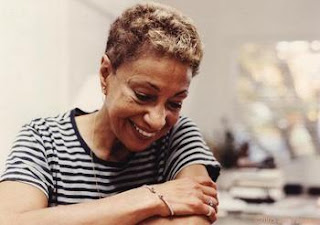 I’ll start with the experience of hearing June read her poetry out loud. It was literally a physical sensation. Hearing her read, there were times when I would laugh as hard as I ever have—June was one of the funniest human beings I’ve known. At other times I thought I was going to burst out sobbing, and I couldn’t hold back a few tears. Sometimes I got goose bumps, and the hair on my arms stood up. Other passages in her poetry were incredibly sexy. It wasn’t like the experience of hearing any other poet. Why?

June committed herself to her readings like no one else She believed 100% in what she was saying in her writing. Maybe that’s how she had the courage to stand up in front of a large audience and read in a dialect of English—Black English—that most people just considered wrong. June helped to revive and honor Black English as a literary medium, and she wrote gracefully and adamantly about its beauty and unique grammar. In her essay written in 1972, “White English/Black English: The Politics of Translation,” from her book Civil Wars, June quotes Shakespeare’s Elizabethan diction and concludes, “Now that ain hardly standard English.” She asserts that “…the Elizabethan, nonstandard English of Romeo and Juliet has been adjudged, by the powerful, as something students should tackle and absorb. By contrast, the Black, nonstandard language of my novel, His Own Where, has been adjudged, by the powerful, as substandard and even injurious to young readers.” She was not afraid to measure her English against Shakespeare’s.
Maybe June Jordan could evoke such a response from her audience because she spoke out against crimes and injustices that you just weren’t supposed to talk about in polite company. She championed the rights of so many, from Puerto Rican and Palestinian independence to blacks who experienced police violence.
Maybe she reached that level in her readings because her way of living was a full-court press. She knew she had only a limited time to make her points, and she made them regardless of what anyone else thought she should be saying. June resisted being pigeon-holed in any way: “Make up your mind! They said. Are you militant or sweet? Are you vegetarian or meat? Are you straight or are you gay?/And I said, Hey! It’s not about my mind.” (from “A Short Note to My Very Critical and Well-Beloved Friends and Comrades” in her book Passion)
At a time when many writers and literary critics in the U.S.A. regarded love poetry as a naive throwback to Edna St. Vincent Millay and the flapper era of the Roaring 20s, June took to heart the work of writing great poems of passion. She looked not to T.S. Eliot and the New Critics and as her role models, but to Pablo Neruda and Walt Whitman.
Part of the appeal of her writing is her amazingly musical sense for language. While she was an undergraduate at Barnard College, June studied piano with a faculty member at the Julliard School of Music. She was at that level in her instrumental talents. Given the musicality of her poetry, it’s not surprising that June collaborated with a stellar array of composers, including Leonard Bernstein, Bernice Johnson Reagon, John Adams, and Adrienne Torf. Here are some of the concluding lines of her great poem, “On a New Year’s Eve”:

all things are dear
that disappear